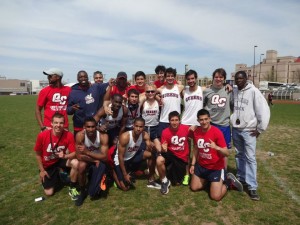 The Knights Men’s Track and Field team won the inaugural East Coast Conference Outdoor Championship on Sunday. The event was close and came down to the final two races on day two at Queens College, but the Knights held off St. Thomas Aquinas 165-164. “I told them give it your all, leave it all on the track,” […]

“Bogus.” Bogus is the word the New York Police Department used in response to the numerous studies and reports that Queens College sociologist Harry Levine has made. His recent report, “One Million Police Hours: Making 440,000 Marijuana Possession Arrests in New York City, 2002-2012,”  details how much time and energy is invested by the NYPD […]