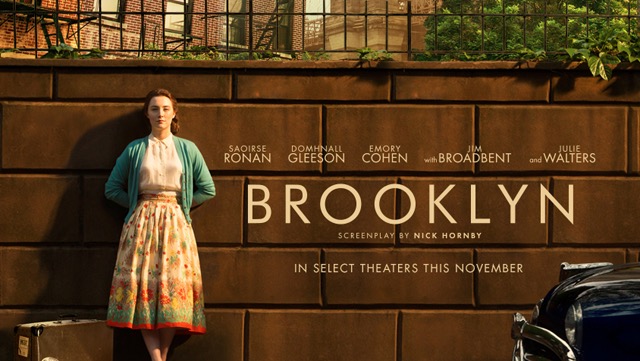 By David Rafailovich on December 2, 2015

“Brooklyn,” directed by John Crowley, shows hardships and homesickness Eilis, a young Irish woman, experiences as she leaves Ireland for a better life in Brooklyn.

“Brooklyn,” though occasionally stepping into the realm of melodrama and sanitizing the immigrant issue, is a touching portrayal of leaving home and the task of conquering the unknown.

Eilis, played by Saorise Ronan, lives at home with her mother and sister in a small-knit community in Ireland.

Eilis can’t find any strapping, young lad for her to marry. She is stuck at a dead-end job at a grocery store under a devilish woman that condescendingly comments on customers’ attendance at church on Sundays. In sum, life in Ireland is dull for her.

Eilis’ mother and sister understand there is not much in Ireland for her, and they purchase her a ticket to America for a better opportunity. She agrees to leave.

Eilis leaves with a heavy heart as she moves toward a new life in Brooklyn. From the onset of her journey, she is miserably homesick and regrets her decision. But she is lucky to come across others willing to give their kindness and understanding to her.

After arriving in Brooklyn, an Irish priest, also a family friend, not only offers Eilis emotional support, but also pays for her education at Brooklyn College.

In Brooklyn, Eilis stays in a boarding house of other girls from Ireland. In the beginning, she can’t socialize or even feign a friendly face; the longing to go back home is too much.

Slowly, Eilis adapts and takes advantage of the opportunities in America. She excels in her accounting classes, picks up American culture and meets a nice Italian guy who falls in love with her. As her roots start to finally sprout in Brooklyn, a dramatic event pulls her back to Ireland.

In Ireland, things are different and opportunities are opening for her. With her accounting education, she is able to get a good-paying, part-time accounting job. She meets a redheaded gentleman whom, despite her love interest in Brooklyn, she can’t help fall for. She is pulled between her old and new life.

The issue with this film is that it is a fairy tale. The story brushes aside the darker aspects of immigration, like poverty and prejudice. Her immigration from Ireland to Brooklyn is paved with characters only with the best intentions and Brooklyn is a friendly haven full of seamless cultural assimilation.

This lack of grit and complexity prevents the film from properly taking on the issue of immigration. Nevertheless, the story is upbeat, heartwarming and funny.

The soul of this film is Ronan, who carries the film with a subtle, yet powerful performance. She is believable, even when the story is not, and gives the story an emotional realism. She is at once subtle and shy, and later transforms into a confident woman making her own choices.

The supporting characters are unrealistic, but redeemed by their sharp and hilarious humor that is enough to suspend disbelief.

Overall, “Brooklyn” is a fairytale of the immigrant experience. The film is more likely to resonate with a transfer student at Queens College than an Irish immigrant who came to Brooklyn post-World War II. However, there is a lot of heart and humor in the film as it profoundly understands of what it means to be homesick and rootless.

David is a freshman and plans to major in english and media studies. David writes the movie review for each issue and loves to watch films. When David is not watching films, he loves obsessing over them.