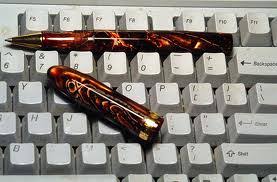 A battle of the pens and keyboards

From handwriting to tablets, students have many ways to take notes, and the choice seems unimportant and insignificant.

But new findings show the choice of note taking is not just about comfort, but also how to register information in the brain.

In a study conducted by Pam Muller of Princeton University and Daniel Oppenheimer of UCLA, researchers found college students taking notes by hand perform better in recalling information than students who type their notes.

This phenomenon is known as the encoding hypothesis that finds people process information when they write it down.

Many students agree technology may distract and hinder them from learning in the classroom.

Joshua Megnauth, a senior majoring in political science, agreed handwriting notes is more effective despite taking more time. He explained there is something liberating about handwriting compared to using technology.

“You can scrawl anywhere you want in any direction you want, for any reason you want, or even doodle in the margins during a lull. I’m a computer nerd, but I handwrite my notes precisely because I don’t want a computer in school to distract me with its allure of games or news,” Megnauth said.

Seo-Young Chu, an English professor at Queens College, said while professors have mixed feelings with technology in the classroom, the method of note taking depends on the type of course. For example, in her honors seminar this year, students could type or handwrite their essays in blue books. Just one student chose to write it by hand.

“I think that the place of the laptop in the classroom depends on the class, the instructor, the assignment and even the configuration of chairs in the room,” she said. “Notes by hand can inscribe information in the mind more effectively than typing can. However, the practice of typing notes has its own advantages—among them legibility and efficiency. Personally, I incorporate a mix of note-taking media from chalkboards to camera phone pictures.”

Madel Beaudouin, a senior majoring in economics and political science, ruled out the possibility of becoming an avid tablet user.

“I prefer to write by hand because it helps me remember my notes more effectively,” Beaudouin said.

Likewise, Sara Dorfman, a senior history major, said, although typing is the faster route, handwriting her notes is better in the long run despite messiness or bad handwriting.

“For the most part, I prefer to write my notes by hand. It takes me a bit longer and my handwriting is terrible, which means my notes look like garbage, but I tend to remember more of what I’m actually writing. When I’m typing my notes, it’s quicker, but it all seems like a blur when I try to remember anything that I typed,” Dorfman said.