As the Spring 2017 semester comes to a close, the Committee for Disabled Students reflect back on another successful year of events and activism on campus. The committee was founded in 1972 and was the first resource on campus for students with disabilities. Originally serving only these students, CDS later expanded to include all registered students and by 1982, under the leadership of Mary Ellen Passantino, membership grew dramatically.

CDS strives for students to learn from one another to create a disability culture, reinforcing the values of the Disability Right Movement, which views disability as limiting only due to external forces. The committee has been dedicated to raising campus awareness of the difficulties students with disabilities encounter everyday.

Nikolas Schulz, Vice Chairperson of the Committee for Disabled Students, reflected back on the 2017 semester with gratification.

“Since I have been a part of the Committee for Disabled Students, I have been very proud of our achievements and the overall development of our committee. The current semester specifically, has been very successful for us. Apart from the Horse Boy trip and all developments around that wonderful cause, the Committee for Disabled Students had an eventful Spring 2017 semester. In April, which is Disability Awareness Month, we were proud to host Ali Stroker, the first person in a wheelchair on Broadway “Spring Awakening”. On top of that, we were overjoyed to host Trevor Noah, from ‘The Daily Show’, on April 20th for a Comedy Night Special. The tickets for the event were sold out within the first two days. We also had the pleasure of having Dr. Danielle Sheypuk, a renowned speaker in the field of ‘Sexuality & Disability‘ at Queens College.” 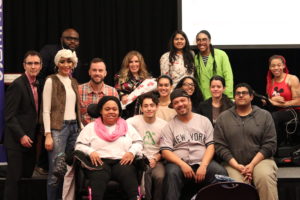 Members of CDS are encouraged to attend conferences dealing with issues of concern to students with disabilities and to CUNY students in general as well as to share their experience with others.

Angela Vohra, a CDS member at large who joined this year, discussed her experience on the committee.

“This was my first year on the board for CDS and I believe that it was a very productive year. We’ve gotten many more members and even more regulars that frequent the club room. There has been a huge success in our events; there are more people that attend, there has been better advertisement, and we were also able to collaborate with other clubs. We are hoping for next year that there will be even more success in membership, events, and collaborations with other clubs.”

CDS also engages in advocacy and fundraising activities both on and off campus. The Horse Boy Trip, which took place in Elgin, Texas, taught members on techniques and skills to assist the needs of children with autism, ADD, and ADHD.

Andrew Ali, the current President of CDS, shared the success of the fundraising and advocacy promotion CDS held over the year.

“In February, we co-sponsored a Parkinson’s Awareness event, which raised money for Parkinson’s research at the NYU Langone Center, in April, we had several events to highlight some topics that should be more spoken about in the community, such as Ali Stroker from Glee whose motto was “Making Your Limitations Your Opportunities,” and Dr. Danielle Sheypuk who specializes in relationships and sex. We also sponsored the Trevor Noah event on April 20th, which was our most successful event to date, with tickets being sold out only two days after being on sale! Nearly 2,000 students, faculty, and other guests attended the Trevor Noah event. I certainly hope CDS will continue to host quality events and have the large attendance that we have had numerous times before.”

The efforts made by CDS, have made significant changes on campus, including the funding of improvements such as signage, installation of ramps, and braille signs. The committee also plans to continue these changes, as Schulz states the success of Autism Awareness day has led to new aspirations for Fall 2017. 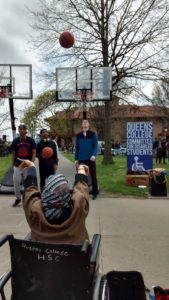 “The last but certainly not least event the committee hosted was during Autism Awareness Day, which was a great success for all participating clubs. The Wheelchair Basketball Shootout, organized by CDS, was able to generate a lot of interest. Over 150 signatures were collected for our petition which asked students if they were interested in bringing Wheelchair Basketball to Queens College. This result will serve as a basis to reintroduce this unique athletic opportunity in the Fall semester of 2017.”

CDS will also be hosting their annual ADA BBQ this July to celebrate the 27th anniversary of the Americans with Disabilities Act (ADA), on July 27th.

To learn more about the Committee for Disabled Students, or to become a member, call (718) 997-5899, email queenscollege.cds@gmail.com or visit their office in Kiely Hall 175.