The Rohingyas are a group of people who originated from Myanmar and have since fled to their neighboring Bangladesh for refuge. The Rohingyas, have been subject to an ethnic genocide in the predominantly Buddhist nation of Myanmar. They hail from the Rakhine state and are mostly Muslim. For many years, Rohingyas were left out of major elections, censuses, and unable to vote for several years prior. According to CNN, 87,000 Rohingyas left for Bangladesh on October 6, 2016, the first wave of the migration. This was sparked when a group of Rohingya men killed nine policemen at the Rakhine border, and the Myanmar military retaliated on the community.

August 25, 2017 is when the second big wave of Rohingya refugees fled to Bangladesh. This was largely due to the Arakan Salvation Rohingya Army (ARSA) killing twelve security officers. The Myanmar army and Rakhine Buddhists pushed for the removal of the Rohingyas after the incident. The Myanmar government has stated that Rohingyas involved in the violence came armed with weaponry which they used to attack thirty police posts. In response, Rohingya villages and homes were burned down by the Myanmar forces and Buddhist mobs who lived nearby. For the Rohingyas that were still alive, moving to Bangladesh was not an option anymore; it became a necessity to escape persecution. Some Rakhine Buddhists have also fled the area to avoid further violence.

The legitimacy of the crisis reporting in Myanmar has been in question for some time now. Then, leader, Aung San Suu Kyi did not condemn the actions of the military but downplayed the situation by painting a picture of the Rohingyas still having their homes. Under her leadership, journalists were thrown in prison for their investigation of Rohingyas who were killed and placed in mass graves in the Rakhine state.

It’s no surprise that Bangladesh has become a place of refuge for these people. In fact, Sheikh Hasina, prime minister of Bangladesh, reported that over 1.1 million Rohingyas currently seek refuge in these camps. The camps, which reside in Cox Bazar, a city part of the Chittagong Division of Bangladesh, are in close proximity to Myanmar. Unfortunately, the camps that the refugees reside in have become overcrowded and have been facing various problems for some time now. More recently the camps were subject to several fires that occurred on March 22nd, 2021.

The fire is said to have started at one camp, and spread to two other camps. There are thirty-four camps, and the fire had the potential to devastate more Rohingyas. According to The Guardian, thousands of Rohingyas were left without shelter and many died due to the fire. Many witnesses pointed out how the situation reminded them of the carnage that occurred in 2017 when their homes were burned down and they were forced out of their homeland.

For many refugees, a safe return to their homeland of Myanmar seems like a lost cause due to the military coups and continued violence against their community. According to The Guardian, it is reported that Rohingyas are being told to relocate to a faraway island located in the Bay of Bengal because of how overcrowded the current camps are. This island is prone to floods, yet 13,000 Rohingyas have since then been relocated. For many Rohingya refugees, the beacon of light seems to be far away as they continue to lose their homes, peace, and 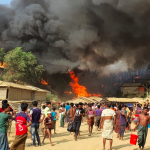