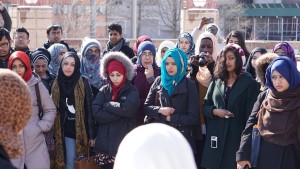 Queens College students honored the lives lost at Chapel Hill, North Carolina in a candlelight vigil on Feb. 18 with a wide attendance of students and faculty members. Groups such as the Muslim Student Association, Project Sunshine and Amnesty International helped organize the event. Guest speakers included Afaf Nasher and Ibrahim Mossallem, both members of the Council on […]

The recent attacks in Europe led to a resurgence of the role of Islam in relation to extremism. On Jan. 7, gunmen, all Muslims, attacked the office of Charlie Hebdo in Paris, a French satirical magazine, which published controversial cartoons that concerned Islam. Twelve people were killed. On Feb. 15, a shooting occurred in Copenhagen, the capital […]