Queen College’s Center for Ethnic, Racial and Religious Understanding (CERRU), recently worked to break the mold of false social identities people have, due to their skin complexion, religious beliefs and backgrounds. Their Social Identity Fashion Show, at the Student Union Ballroom on April 24th, showcased 15 models donning two separate looks; the first depicted the impressions people typically make of them, followed by a second look, which the models felt were a true a representation of who they really were.

Trey Adams, a professional actor who runs his own YouTube channel “TreySP,” turned to his co-host, Arielle Rosenstock, and asked what she thought of his outfit. Glancing over at his blue jeans, black suit and converse sneakers, she smiled saying she did not see anything wrong with his attire. He then revealed how he always gets confused for a “thug,” whenever he’s out in a hoodie. In fact, just that morning, an officer approached him while he was at a local deli, mistaking him for a criminal that “looked like him.”

Arielle Rosenstock, a junior majoring in anthropology and elementary education, sympathized with Adams, stating that she knows how it feels to be misidentified.

“People always think I am that typical cheerleader type of girl,” when in reality, she is anything but that—“I am known for having a modest sense of fashion, while also rocking scarves in almost any season. My modest sense of fashion seems to fit the innocent and sweet personality, while my tattoo on my back shows the tougher and fiercer side of me,” Rosenstock explained.

Model Jennifer Fernandez, a senior Economics and Textiles and Apparel major, wore a purple Indian inspired outfit, reflecting her years of being perceived as “Desi,” a term given to those descended from the Indian subcontinent or South Asia.

“When I wear a scarf in the summer, people always considers me as an Indian. I’m not Indian, I’m Dominican,” Fernandez stated. Her second look, that she personally designed, was inspired “by the folkloric dress that is usually seen in cultural events and dances,” in the Dominican Republic, informing that “the white is what divides the flag into four rectangles and means salvation; the blue is for liberty android is for the blood of [the] heroes.” 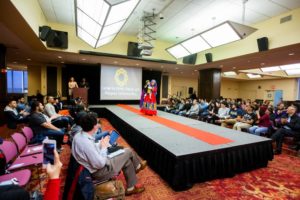 Mohammed Chowdhury, another model, revealed the many times he had been mistakenly thought as being dangerous, because of his native roots.

“I have had people approach me and ask why my people are so dangerous. I would try my best to make these people understand that there are Muslims in different countries who live peacefully, that Muslim isn’t a race, and that Islam does not support terrorism.”

Chowdhury continued, adding that “society has the wrong idea on Muslims; people believe that Muslim beat their wives…this is completely wrong. I have seen Muslims being discriminated against because they were believed to be dangerous.”

Showcasing the stereotypical views of all Muslims being geeks and terrorists, Chowdhury wore a prison-inspired, black and white striped suit, with an orange toy-gun in one hand and a black briefcase in the other. His second ensemble depicted how he wants to viewed—an adventurous outdoorsy person, who likes getting his hands dirty.

Esther Shimunov a history major and sociology minor was born in a culture where the idea of having a voice and being able to explore the world from a women’s point of view is shunned. Shimunov, a Buharian Jew, wore a white hoodie dress that symbolized “silence and submission to family and tradition.” Her hood covered her face to disclose, how women are silenced by a closed door in her cultural. The word “RESPONSIBLITY,” imprinted across the front of her dress, signified the responsibilities weighed down on Bukharian girls. Decorated on the side of her dress was the phrase “Shut up and sit down,” which in her culture, girls have to do.

Shimunov opted for a more contemporary and classy look the second time around, donning a sheer-sleeved black top tucked into a white fluted ribbed skirt. Shiminov stated she feels the happiest when she dresses “in a manner that is [both] classy and elegant.”

CERRU’S Social Identity Fashion Show is the ability to embrace their own sense of style, and not fall victim to people’s misconstrued perceptions of them—wear what you feel the happiest in, even if it means stepping out of the norm.