On March 27th, the Philosophy Club and Students for Liberty co-hosted “The Symposium: On Justice & Liberty” at the Agora Café.   The symposium served as a means for discussing the broad topics surrounding the theme of justice and liberty. Participants were put into discussion groups in order to facilitate the process.   “It was […]

Dialogues of the Carmelites comes to Queens College

Queens College’s Aaron Copland School of Music and the department of drama, theatre and dance came together to put on a performance of Francis Poulenc’s “Dialogues of the Carmelites,” from March 13 to 16 in the Goldstein Theatre. The opera spanned three acts during a chaotic time in France. The story follows Blanche, a young […] 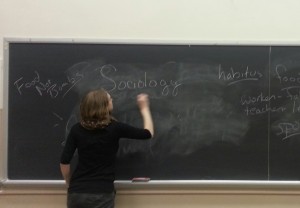 CUNY adjuncts are not paid on time

More than 400 CUNY adjuncts did not receive a paycheck for their work in August and September due to a glitch in the CUNY payroll system. Many of the adjuncts were hired in August, shortly before the fall 2013 semester began. Oswald Frances, head of human resources, blamed the problem on a new payroll system […]