“Get that laptop out of my face,” is just one of the many complaints voiced every year during elections when students are pestered by committee members from their respective parties to The Student Association recently considered adopting polling stations like those used in U.S. presidential elections. “We’ve heard complaints by students about our current election system,” Karamvir Singh, president […]

Emergence of swastikas on campus

Swastikas were seen on walls inside Powdermaker Hall during the week of Kristallnacht, an annual event that calls awareness to Nov. 9, 1938, when the Nazis coordinated an attack on Jews and their property in Germany. “The discovery of swastikas on campus particularly during the week commemorating Kristallnacht and the start of the Holocaust is […] 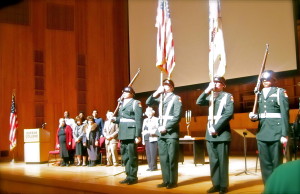 The message of peace reverberated within the Lefrak Concert Hall on Nov. 18, as the fifth annual Kristallnacht commemoration held at Queens College, gathered supporters to combat anti-Semitism and hatred in its many forms. Kristallnacht, which means “night of crystal,” refers to a series of attacks against Jews during the time of Nazi rule in […]

The evacuation center for victims of Hurricane Sandy located at the Fitzgerald Gym in Queens College, which housed up to 550 people over its course of 22 days in operation, officially closed on Nov. 18. Fitzgerald Gym served as a safe haven for people from Queens who lost their homes or did not have electricity […] 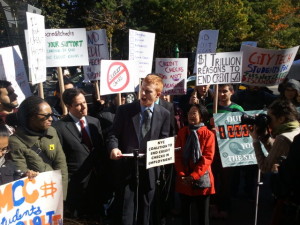 Credit checks cause unrest among Students

Dozens of students crowded the entrance of the Borough of Manhattan Community College on Oct. 15, as the New York Public Interest Research Group held a press conference that discussed the outrage felt by students who have fallen victim to unemployment based on credit checks. “People are unaware that this is happening and why it’s […]