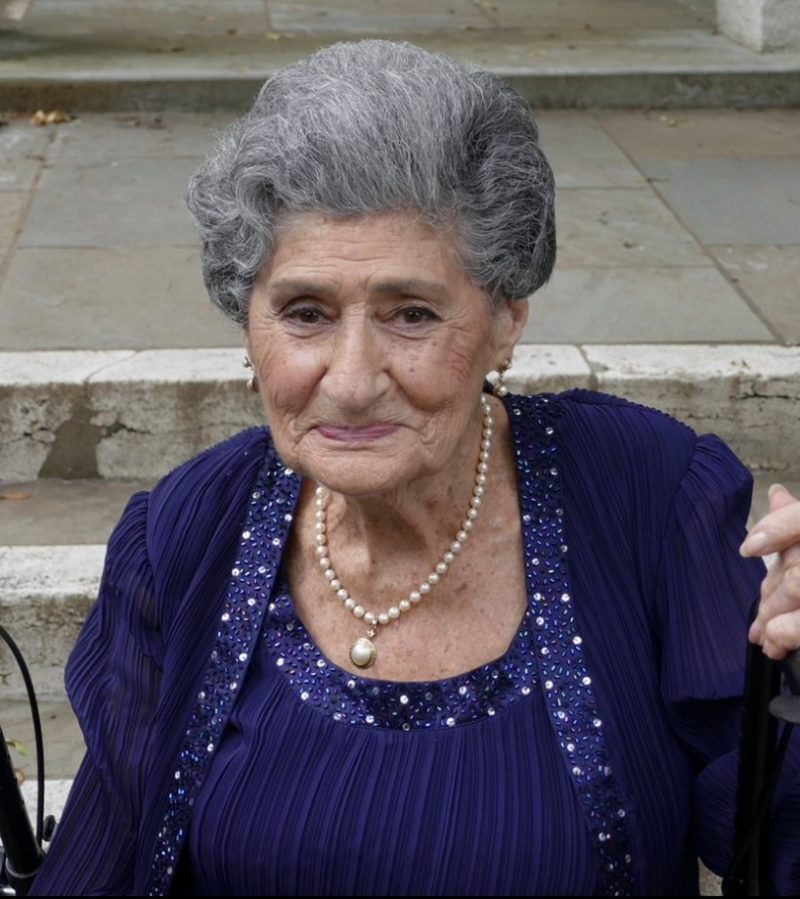 Meet Mira Rosenblatt. She is a mother, grandmother, and a great-grandmother. She is a New Yorker, and a Polish native. She is also a Jewish Holocaust survivor.

Mira Rosenblatt’s childhood was like any other Jewish child. She was raised by a Polish mother and father, and had three brothers and two sisters. She was taught how to help her parents work in a store, how to speak Yiddish, Polish, Hebrew, and German, and that being Jewish was a birthright, not a lifestyle. The Rosenblatt family lived in a 39 brick-tenant building, built by Mira’s grandfather, in a densely populated Jewish neighborhood. Every day Mira would get up at 5 o’clock in the morning, go to school until 2 o’clock, come home and take over the family store while her father had dinner. Although she was only a child, she was mature enough to handle anything.

Mira’s grandfather owned a factory that made copper pipes. Mira’s mother grew up in Sosnowiec, while her father came from Bedzin. Together, they raised Mira and her siblings, Herschel, Manek, Vida Malka, Estusha and Natan in a strictly-religious household, as both adults had received religious and secular educations’. In fact, the family was very close to some of the community’s rabbis’, one of whom was named Rabbi Englard. Both of them spoke very good Polish and Yiddish, but Mira’s mother was also a good speaker of Hebrew, Esperanto, German, and Russian.

There were about 20,000 Jews living in Sosnowiec where the Rosenblatt family resided. Sosnowiec is close to Bedzin and Zawiercie which also had large Jewish populations, and – only 45 minutes away from Mira’s hometown marked the Polish-German border. People would walk the 45-minute journey to Sosnowiec for all kinds of purposes: business, leisure, and politics. In November of 1938, when Mira was 12 years old, German soldiers, historically known as Nazis, ransacked her town. The night would eventually come to be known as Kristallnacht, or ‘Night of the Broken Glass’; the title was inspired by the Nazis’ ravaging of Jewish businesses – they smashed through windows, set fire to items being sold, and massacred the reputations of Jewish business-owners.

On September 1st, 1939, the Holocaust broke out in Europe. On September 4th, the Nazis occupied Sosnowiec. As Mira recalls, “Once they took us all, the Germans came in on Monday, [at] one-thirty, and they took all the Jewish [people]. There was a law made to protect German soldiers: “If one soldier be killed ten of them [Jews] be killed”.

From 1940 to 1942, Mira, her siblings Vida Malka, Estusha, and Natan, and their parents, lived in the Sosnowiec ghetto, where Mira was forced to work in a factory, ironing uniforms. Every day she would head in for the night shift, which lasted from 6pm until 6am the next day, to receive bread-ration cards to sustain her family. On August 12, 1942, all the Jews of Sosnowiec were ordered to report to the Stadium and Mira was ‘selected’ to be deported to a work camp. It was there that Mira was separated from her family and never saw them again. She was then marched to the “Dulag” deportation center and deported to Gruenberg, Germany, which was part of the Gross-Rosen concentration camp complex.

Mira, along with over a thousand Jewish women were forced to work in the concentration camp’s textile factory; Her daughter, Belinda, described it as a “forced slave labor camp”. There, the factory had different divisions. Mira was in charge of making uniforms for soldiers, using materials shipped to the factory from Auschwitz, another concentration camp based in Poland. She would rip apart the materials, break them down, rethread and then respool the thread in order to create the new garments. Her job included running the three machines, one of which she said was “the size of a large dining room”. The machines would often break, but due to her small size and prior experience working with her parents in their store, she was able to present herself as a good worker; something that would ultimately contribute to her survival. During the interview, Mira recollected that she still has the samples of the materials that she used back then.

After three years of working in the factory, Mira was ordered to join the infamous Death March in January 1945: “on the 25th, I came back from work [in the morning], and all of a sudden the soldiers told me, ‘No, you are going, you have to get dressed, you are going to the Death March’… [we] got dressed, and we started to walk”. The Death March was a punishment in which the Nazi Party forced millions of Jewish prisoners to walk hundreds of miles in below-zero temperatures through Germany, resulting in many freezing to death, or dying of hunger and/or exhaustion.

“All of a sudden, I think so [that] the SS man needed to use the bathroom, so we stopped. I picked myself up, and I went to the forest, making up that I had to use the bathroom” she said. But when everyone started walking, Mira and another girl, Basha were left behind. “I was left over there, with another girl. They got up, [the SS man] came back, [everyone] got up, and they left and I was over there, in the forest, eating the snakes and the dirt”. When it dawned on Mira that she had successfully escaped, she started to look around for somewhere to go. But as she didn’t see anyone, or any place to go, she became lost. “Finally, I was in the forest all night, withBasha, and finally, I saw a chimney,” she recalled. With her excuse in mind, she knocked in the door. When the woman answered her door, she saw a young girl on her doorstep, claiming that she lost her parents and if she could stay with her?

Along the way Mira had run into three other girls, who she helped by hiding them in the woman’s barn. Every night and day, the girls hid behind the hay while Mira secretly smuggled them food. In the meantime, Mira offered to help the woman with household chores, such as feeding the farm animals. Over the next two months, the old woman and Mira  grew closer, and the woman asked  Mira to stay with her, unaware of who Mira really was. As hard as it was to leave the comfort and feeling of safety of the old woman’s house, Mira knew she had to leave. She told the old woman she had “lost her papers’ and needed to find her parents.

Around March or April of 1945, all five girls left the farm. The three other girls found someone to hide them and left Mira and her friend Basha behind. After this, the pair found a Polish man with a wagon. In Polish, Mira asked him if he could smuggle them in his wagon, as they had gotten separated from their group. He agreed, and they got a ride to a farm. Now, Mira was living under the pseudonym ‘Irina’, in order to conceal her Jewish ancestry, and spoke Polish very well. The Russian army gained control of the farm and wanted Mira/Irina to help bring the six hundred prize cows back to Russia. She refused to go with them. The war was over but Mira didn’t know what to do. She wrote a letter to the super of her old apartment building: “If anybody is alive,” she wrote, “you have to come get me”. Her future husband, Henry, found her letter when he returned home to look for her. During the war Henry had been in Auschwitz, and then the Death March, until he was freed in April 1945. The area Mira was in was in the middle of fighting between the Russians and Germans, and most of the people living there had run away, so Henry had no one to ask where she was. But after arriving at the wrong town, and walking for an extra eight days, he found Mira. Upon his arrival, Henry found that all the buildings were empty, so he took Mira’s letter and waved it around in his hand. It wasn’t until someone recognized Mira’s handwriting that the pair reunited.

Mira remembered that he was wearing a green jacket, similar to an American soldier’s uniform, which scared the Polish people. She reassured them that he wasn’t American, and that he wasn’t going to do any harm to anyone. The next morning, Henry and Mira packed their things, preparing to leave, when the Polish people on the farm  begged her to stay; they were completely unaware that she was Jewish.

But what was perhaps Mira’s greatest battle throughout the Holocaust, was the battle she fought with her faith. “I would have liked to know where my parents and everybody [were],” she confessed tearfully. “I believe in G-d because I was eating snakes and I was eating dirt. This was because I didn’t have a piece of bread. So you do it… because G-d didn’t show up. Nobody showed up to help you. Nobody was alive to help you.” But despite the most tragic and horrific events that she lived through, Mira still believes. “I still believe in G-d, and I believe in miracles.”

Even in today’s times, there are, unfortunately, people who do not believe that the Holocaust ever occurred. When asked what she would say if someone were to confront her about this, Mira responded: “Let them go and live with us in Poland. When you come out and weigh only 68 pounds, 5 [feet] 7 [inches]; ask them if they can understand this”. Mira Rosenblatt’s grandparents died before the War, in 1934, and 1935. In 1939, her two brothers, Herschel and Manek fled to Russia, and eventually Uzbekistan, where they remained for the duration of the war. Mira’s sister Vida Malka stayed with Estushsa, and Natan until she was deported to a work camp, most likely in Neusalz, Poland, in 1943, according to Belinda. It is believed that she died on the Death March. The only family that Mira reconnected with after the War were her two brothers Herschel and Manek.

Belinda has a message for the Jewish generations, both of today’s era, and those of the future: “People are people. Some people are good, and some people are bad, and it doesn’t matter if they are Jewish. That is what my mother learned during the War. She never knew who was going to extend a helping hand, and she never knew who was going to hurt her. My mother’s message to you: “Meet all people with the hope that they are good people. And maybe they will be because you just never know. Always hope for the best.”

The Knight News would like to thank Mira for granting us the generous opportunity to hear her story, as well as her daughter, Belinda, for her contributions, and her grandson, Matthew, for his help in bringing this opportunity to fruition. We would like to extend our deepest condolences to the Rosenblatt family’s collective loss. May their memories always be a blessing.

Published in Editorials and News