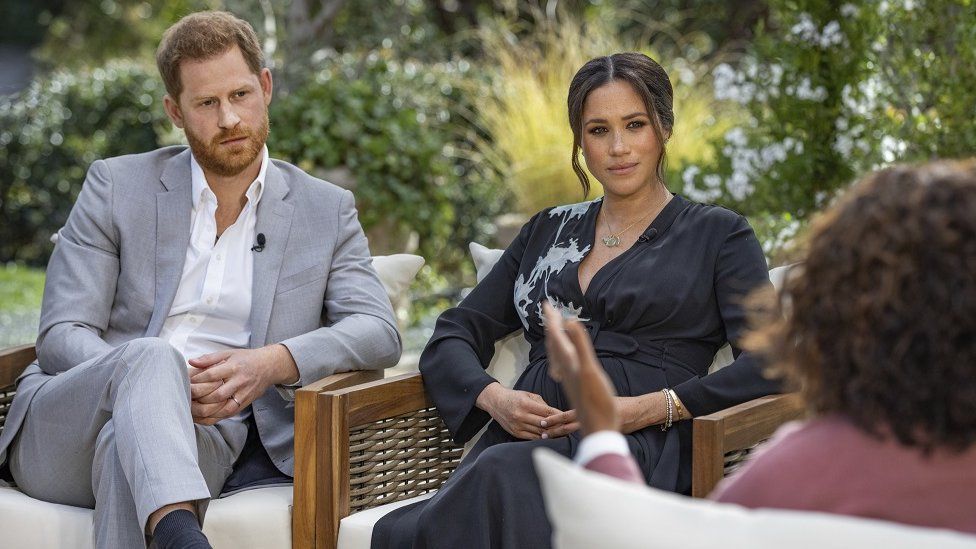 On March 7th, CBS broadcasted an exclusive interview with Prince Harry, who is also known as Henry Charles Albert David, and his wife Meghan Markle, as they recounted all the mistreatment they allegedly faced at the hands of the Royal Family for over two years.

In a 2-hour-long chat with Oprah, Markle and Harry shared details of what drove the couple to officially remove themselves from their royal positions in January 2020. “Almost unsurvivable,” are the words Meghan Markle chose to describe her experience as part of England’s monarchy after marrying Prince Harry in May of 2018. From allegations of racist remarks to mental health neglect, the Royal Family is now under fire for the suffering Meghan claims she was put through.

Even before Markle had wed Harry, she began facing a barrage of hate from the British tabloids, including stories, like that of Meghan making Kate Middleton cry, that Meghan claims were completely fabricated. Yet, despite the monarchy’s promise to Markle that she would always be protected, they never negated any false narratives or called for any articles to be taken down. This was just the beginning of what would become a toxic relationship between the former “Suits” actress and the Royal Institution.

The peak of the duchess’s torment came around January of 2019 when she confessed to Harry that her life as a royal had tremendously deteriorated her mental health, so much so that she had considered taking her own life. Yet, any type of help for Meghan was refused, as she was told by royal senior officials, “it wouldn’t be good for the institution.” For many, this sounded disturbingly similar to Princess Diana’s struggle with depression and self-harm, which was also ignored by the monarchy.

Perhaps the most shocking story Harry and Meghan divulged from their shared royal experience was from the time of Meghan’s pregnancy with the couple’s first-born, Archie. One member of the Royal Family, a name the couple refused to disclose, made comments on how dark Archie’s skin might be when born. Confirming that it was neither the Queen nor Prince Philip, the couple has left viewers speculating for weeks who it may have been.

While hearing this particular claim outright can be gasp-worthy, allegations of racism within the monarchy are not all surprising. The British Empire, dating back as early as the 16th century, was founded on colonialism. African slaves were brought to Caribbean colonies to work, and Queen Elizabeth I donated a vessel to one of the first Englishmen to partake in the trade industry. Colony natives often faced derogatory language and brutality at the hands of British soldiers, as was seen in India in the 1800s-1900s. While many territories have since won their independence, Britain still maintains several overseas territories like Turks and Caicos, and Bermuda.

While the current queen is not directly responsible for the Commonwealth’s past wrongdoings, she has not once addressed them within her 69-year reign. Prince Philip is known to be particularly blatant with his racist remarks as well, and the Royal Family as a whole remained silent during the peak of the BLM movement this past summer.

Academic and writer Priyamvada Gopal commented, “This is a deeply white institution…so for someone who has actually gone into the heart of whiteness as it were, and comes out with a story to tell, and the story doesn’t surprise you—I think people will feel vindicated about something that they always suspected…”

So just how negatively will this interview impact the view of Buckingham Palace? A live YouGov poll was done in the UK after the interview had aired and asked pollers who their sympathies lied with most. Approximately 40% of pollers voted for the Royal Family, 24% voted for Harry and Meghan, and 24% voted neither. While the majority sympathized with the monarchy, the 24% that allied with Markle and Prince Harry is still a substantial amount for a kingdom that almost always stands by its Queen. The citizens of Australia, New Zealand, and other former territories of the UK that still recognize Elizabeth II as their head of state, are calling for complete dissociation from the Commonwealth.

Still, despite all this controversy, there’s little chance the Institution will actually face any repercussions or loss of power. The British monarchy is around 1200 years old; something as ancient as that is hard to shake. Sean O’Grady, Associate Editor of The Independent and former employee of Parliament, wrote in an article, “No doubt the institution will survive, for the time being – it’s been shown to be very resilient, and has been through worse in the past; distressing as the revelations are.”