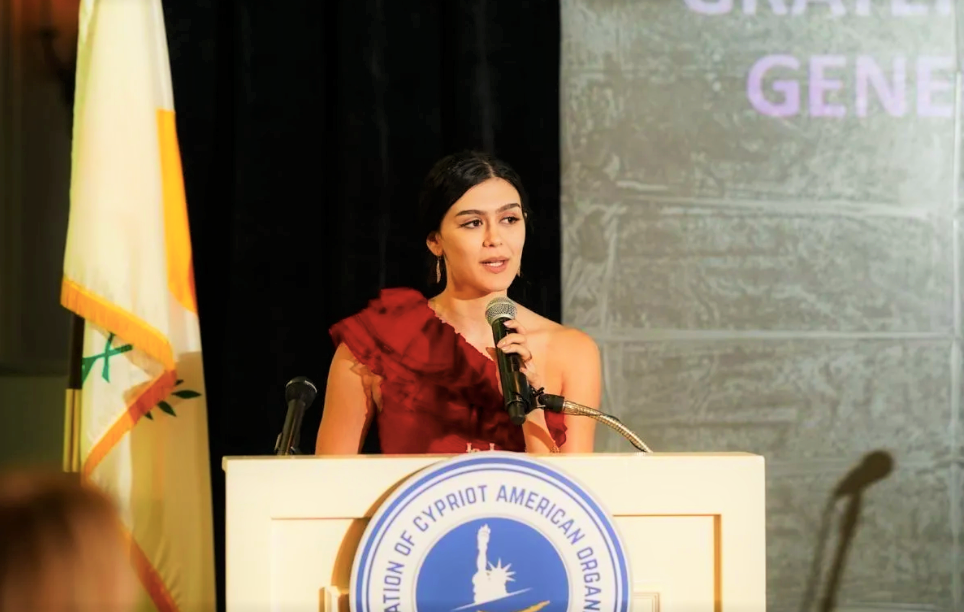 “I grew up with an understanding of society from a post-conflict perspective. UN peacekeepers, military trucks, barbed wire – all that was very normal to me.” – Anna Savva

Queens College alumna and Human Rights Activist Anna Savva, exemplifies both aspects of her Cypriot-American identity, from pursuing a Master’s degree at Columbia University to being the Master of Ceremonies at the 2021 Cypriot Federation Event.

Growing up in Cyprus, Savva tells The Knight News how her experiences there influenced her passion for human rights. “Cyprus is the sixth most militarized country in the world. Yet, it’s one of the most peaceful places you can visit. It’s beautiful, but also seconds away from war.”

Positioned in Asia, the island is considered a transcontinental country due to its close proximity with Europe, which is why it was approved for EU membership. Colonized throughout its history, Cyprus has been under rule of the Assyrians, Byzantine Empire, and Ottoman Empire. After the British Empire dissolved and Cyprus gained independence, a military clash between Greece and Turkey in 1974 caused the nation to become divided. To this day, the southern portion of the island is known as the Republic of Cyprus, while the north is still occupied by Turkey through a de facto state.

Savva reflected on her own experiences of living in the divided capital, outlining the interaction between Greek and Turkish-Cypriots. “One day, I was in class singing the tune of a song called ‘Tillirkotissa;’ it’s Cypriot. I was humming and I heard someone singing along, but the words sounded different. I looked up waiting to see another Greek-Cypriot student, but it was a Turkish-Cypriot student. I asked them how they knew the song and it turned out that Turkish-Cypriots also sing the song in a similar variation.”

The decision to move to the United States after high school came after receiving an offer to enroll in Queens College’s Freshman Honors Program. Despite having dual citizenship, Savva still felt like an international student:

My mom is Greek-American, so I grew up hearing English in the house, but the biggest thing for me was the cultural shift. I always say, ‘I came from the island that always sleeps to the city that never sleeps.’ It’s kind of crazy, because every day at Cyprus you’re having your coffee at the café and relaxing by the beach and then you come to New York City. This urban jungle was a complete 180 for me.

Savva continued her involvement with human rights advocacy, being the president of Model UN at Queens College and participating in the Ibrahim Leadership and Dialogue Fellowship.

Studying Political Science and Comparative Literature, Savva explains how she merged the two fields. “I would say political science is the practical element of the structures that we have, while comparative literature teaches us how to integrate empathy into these structures.”

All these efforts and more throughout the Queens College community eventually culminated in Savva becoming the commencement speaker for the 2021 graduation ceremony.

“It was an honor to be selected. I wanted to make sure I could represent the Queens College student body. Especially since this was an online ceremony, I really wanted to leave them with some kind of affirmation that, ‘You did this. You made it,’” Savva told The Knight News.

The speech garnered the attention of the Federation of Cypriot American Organizations, which invited Anna to be the Master of Ceremonies for the 2021 Cypriot Federation Event.

Representing the Cypriot youth diaspora for NEPOMAK, Anna had the opportunity to meet the President of Cyprus.

It was amazing. I went up to him and asked if I could take a selfie with him to appeal to the youth, and he agreed. The picture kind of went viral on Twitter, because people were laughing at the fact that on Instagram, I posted it saying, ‘Oh, I’m going to take his spot.’ There was a lot of support, people saying like, ‘Oh, I’ll vote for her,’ and ‘She’ll be the first female president.’

Currently attending Columbia University in pursuit of a Master’s degree in Human Rights, Anna hopes to expand her research in post-conflict societies and eventually work in non-profit.

Anna’s advice to readers was simple. “My favorite thing to say is always lead compassionately and have empathy at the forefront of all the decisions you make.”

To stay in the know about Anna’s involvement in Human Rights, follow her on LinkedIn.