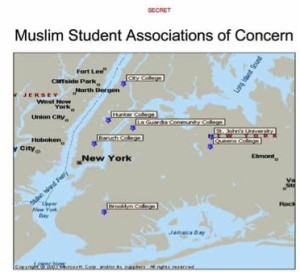 Two years ago, The Associated Press released numerous stories of the New York Police Department’s surveillance of Muslims and controversy erupted as to whether the NYPD could be trusted as a result of this evidence made public.

A report by a coalition of civil liberty groups has detailed the impact of the surveillance program by the NYPD on Muslims not only after the 2011 AP reports, but after Sept. 11 as well. The report, “Mapping Muslims: NYPD Spying and its Impact on American Muslims,” was released in February and examines how the NYPD sent informants to mosques, organized groups and even the CUNY schools, to spy on Muslims.

Muslim Student Associations across the CUNY system were listed as areas “of concern” for multitude of reasons, such as militant paintball trips, politically active students or even speakers invited to events. Informants were sent by the NYPD and were even recruited as students with the promise of money in return. Knowledge of these informants created suspicion among students not only in the MSA, but throughout the Muslim community.

The report features how profound the surveillance program has affected Muslims and their livelihood from the way they speak to how they appear. One Queens College student, going by a pseudonym, stated how others felt when learning she went to QC.

“They say ‘don’t you go to Queens College? Isn’t that where all the terrorists are?’ They saw it on the news that they were spying on us,” Sameera said.

Such repression was criticized by the report as creating “a pervasive climate of fear and suspicion, encroaching upon every aspect of individual and community life.” In addition, it states that the program had “severed the trust that should exist between the police department and the communities it is charged with protecting.”

One of the organizations that assisted with the report, The Creating Law Enforcement Accountability and Responsibility project, advocated for “Know-Your-Rights” workshops and “other rights-awareness campaigns” in communities and colleges to further understand the rights of Muslims against such a program by the NYPD.

Overall, the program had led to distrust among many Muslims of the NYPD and their actions with one student from Brooklyn College speaking about how the term “Muslim” might be perceived by the NYPD and others.

“It’s as if the law says: the more Muslim you are, the more trouble you can be, so decrease your Islam,” said Sari, speaking under a pseudonym.

Brandon is a senior majoring in Political Science and Economics with a minor in Business And Liberal Arts. He covers labor and activism at CUNY. He also likes to cook, bake, run and make puns, sometimes not in that order. You can follow him on Twitter @BrandonJ_R and email him at brandon[at]theknightnews.com.

CUNY reactions to the election