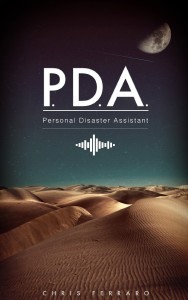 Personal Disaster Assistant, or PDA, by Queens College alum Chris Ferraro, is a story about a man named Doug Macklin who has to deal with futuristic contact lenses, talking chairs, alien-worshipping terrorists…and camels.

After being ejected from an airplane, Doug is forced to journey through the desert where he has several misadventures and is almost killed a few times before being told that he is a contestant on a reality show. The book is a combination of dark comedy and science fiction, and examines how people’s reliance on technology does not answer their questions about life.

Ferraro used to write sports and entertainment articles, but always enjoyed writing stories like PDA. He wanted to prove to himself that he could do science fiction and dark comedy at the same time. Ferraro was inspired by the writers Douglas Adams and William Gibson and wanted to write a story that would pay homage to them both.

After writing for many sports and entertainment magazines, Ferraro eventually decided to teach history and satisfied his craving to write by submitting articles to history and education journals. He felt that now was finally the time to get his science fiction down on paper as “it’s really the only type of writing that I enjoy but have not been able to publish,” Ferraro said.

“The story does contain a message. “It is one novella-sized social commentary. I feel that if we can’t laugh at our current trends, like constantly being attached to our smart phones or having to update our status, then we are really in trouble.  I hope the story gives people something to think about in that way,” said Ferraro.

Ferraro chose to self-publish PDA “for the same reason that many bands choose to put their music straight to YouTube,” he said.

“I really didn’t want some massive corporation deciding the fate of my story,” he said.

Instead, he decided to put it out there and let the public decide.

While PDA can be read simply as a story, the novel raises important questions concerning whether we can succeed as human beings if we are constantly attached to technology, even if not to the extent as described in the book. PDA makes it very clear that our constant attachment to technology can change our very essence as human beings. Additionally, PDA paints a very vivid picture of what the world can become if we are not aware of how technology can change us.

PDA is currently available on Amazon.com and will be available at Barnes & Noble for the nook and on Google Play Books in December.