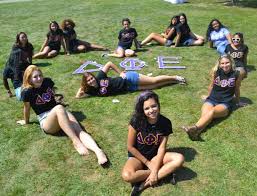 Eighteen models prepared to walk down a runway at Student Union ballroom for Delta Phi Epsilon’s fifth annual “Comfortable in Your Genes Fashion Show” for eating disorder awareness on March 8.

It was also a fundraiser for the National Association of Anorexia Nervosa and Associated Disorders. ANAD is a non-profit group that spreads awareness of anorexia and supports those struggling with eating disorders.

Nearly 30 million people in the United States suffer from an eating disorder, according to ANAD.

Delta Phi Epsilon also created a video that included all sorority members saying what they loved about themselves.

Maclynn Kornreich, president of Delta Phi Epsilon, explained there were misconceptions about anorexia. For one, the illness affects everyone.

“It affects not only females, but also males as well,” Kornreich said.

Lizz Iannarelli, a member of the sorority, also said eating disorders were not well understood in society.

“People often think it’s just people that are being down on their bodies and being negative, but it is a mental illness,” she said.

Iannarelli helped organize the event, and enjoyed others assisting her in creating the show.

“I’ve been planning this for like two months. It’s definitely a process setting up for an event like this because it’s big and a lot of people know us for this, alum too,” Iannarelli said. “It was fun to plan. It’s cool when you hold an event and people actually care about the cause.”

Alessandra Gluf, one model involved with the show, said the entire event highlighted an important issue.

“It’s for a good cause, I know a few people that have anorexia, so I did it for them.” Gluf said.

Kornreich felt proud with not only the students in attendance, but also organizations that were present like Phi Sigma Sigma and Gamma Omega Delta.

Students from Queens College came out in large numbers to support the sisters of Delta Phi Epsilon.

“What made today more different is that we had more organizations found on campus come, contribute and support us,” Kornreich said.

Tiff Catalano, a senior, said there was a good turnout of people at the fashion show.

“I came to show my support for Delta Phi Epsilon, and also to help bring awareness to eating disorders,” Catalano said. “Delta Phi Epsilon did a fantastic job hosting this event and I cannot wait to see what is in store next year.”

Kornreich wants the following year’s fashion show “bigger and better.” But for now, she is glad the event raised money for ANAD.

“Our goal every semester is to fundraise $1,000 for the charity minimum, and I definitely think we did,” Kornreich said.