On a windy Thursday afternoon the Queens College track team captain Skandal Delince took the hurdles back to the storage room with his assistant coach as teammates walked off the track field. 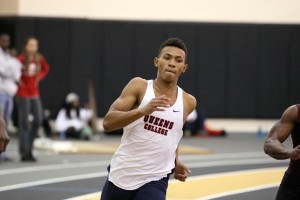 “It’s a lot of responsibility. Like random stuff that I’m supposed to be responsible for that I didn’t know about. I always take the blame for my teammates over anything,” Delince said.

His excellence on the track transfers to his academics. Delince has a 3.67 GPA and has been on the ECC Commissioners Honors Roll as well as received the scholar athlete award.

The 21-year-old junior double majoring in Psychology and Sociology will be graduating a year early in Spring 2016. He hopes to further his education at QC School of Psychology graduate program, and eventually become a School Psychologist at St. Anthony’s High School, his alma mater.

At five years old, he began playing sports for fun; however, it was slightly competitive because he played with his brother, who is two years older.

“It was really a way of getting out of the house,” Delince said.

Sports became more than just a game when he started training for the football team his freshman year of high school.

“I made the team, then I realized how good I was. I did both football and track, I was always busy all year round but I didn’t mind. I would’ve gone home and done nothing anyways,” he said.

Although he has competed for seven years now, he still gets anxious before his races.

“I pace a lot. You can tell I’m nervous because I just keep walking back and forth. And I’ll talk to everyone; I’ll just make friends with anyone there. I’ll leave a track meet and I’ll make like five or six new friends,” he said.

He also acknowledges his deceased father and asks him for good luck before a race.

His favorite team to compete against is the Spartans from St. Thomas Aquinas.

“We’ll always have one of the fastest runners between our two schools. It’s a good competition every time. I’m also really good friends with half of their team,” he said.

One of those friends, who he used to compete against, is now his assistant coach, George Erazo.

“He was a fighter, I knew he was always going to give me 110 percent. He was a really good competitor. It’s a lot better now that I’m coaching him. I can help him out in anyway that I can,” Erazo said.

Delince is described as ambitious, motivated and helpful.

“He always wants to improve everyday. He’s always asking to do one more set of workouts. He wants to do better than he did the day before.” Erazo said.

Junior Romaine Ewan, Delince’s teammate, appreciates him as a captain and as a friend.

“He always tries to look for ways to encourage his teammates and help you out if you’re slacking. I’m going to miss his funny attitude,” he said.

Delince admires Lebron James for his exceptional talent and leadership. It’s no coincidence that he exemplifies this characteristic in his own leadership.

“He leads his team by making sure everyone else is involved,” he said.

His weakness according to his coach is his mental game.

“He gets a little angry at himself and I try to calm him down, but I know where he’s coming from. He’ll get it and it’ll come to him,” Erazo said.

On the table in front of him next to some papers is his laptop. Delince is studying for a midterm he has the next day.

“I’m studying four to five nights a week, basically I know I have to study every night. It’s the sacrifice you have to make,” he said.

Junior Sarah Hussain is Delince’s friend for two years said she believes he gets a little lazy in terms of school responsibilities and doesn’t apply himself well enough to reach his true potential.

“I think he’s smart, he has a great GPA. I’m not him but from I what I see I don’t think he studies a lot so he could probably have a 4.0 if he wanted,” she said.

In his personal statement for graduate school, he affirmed his certainty about his career path.

“Junior year of high school was when I came to the realization that psychology intrigued me. It drew me in, but like every young adolescent, I had my doubts,” Delince wrote. “However, as I grew older and broadened my understanding of psychology, I was reassured that this was the road I was meant to travel down.”

“He cares a lot, it’s not going to be something he’s going to take for granted,” Camacho said.

Balancing his responsibilities as a captain and as a student while working at the QC Tennis office as an office assistant can become quite stressful. To unwind he babysits his niece and nephew twice a week.

“They’re absolute characters, I act like a big kid around them so it’s fun. I mean I can only keep up with them for the first two hours,” he said.

What keeps Delince motivated and focused are his sisters. They have set the standards high and he strives to live up to them.

“The most recent advice I’ve gotten is to stop worrying about my future because everything will work out if I handle my part,” Delince said.