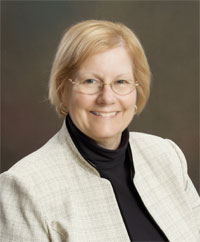 Dr. Janice P. Smith, Associate Chair of Aaron Copland School of Music, has been surrounded by music her whole life.

She was surrounded by musical influences, such as her two aunts, and listened to recordings played by family members. Music became natural to her. She learned how to play the piano when she was eight years old. Then, she proceeded to play percussion and the oboe.

“My aunts inspired me,” Smith said. “One played the piano and the other sang.”

Smith continued to pursue her passion after grade school. She received her bachelor’s and master’s degree in music education at the University of Maine. She started teaching at School Union 91 and 92 in Maine.

“I wanted to be able to teach the next generations of teachers. I enjoyed working with student teachers in college and I decided I wanted to help them learn to teach,” Smith said.

Smith had a mentor that would play her recordings and concerts. She said how she had very good music teachers growing up, who did a lot of influential and entertaining activities in class.

“My influential mentor was Betty Atterbury,” she said. “She was a professor at the University of Southern Maine and I had taken a few classes with her. She encouraged me to get a Doctorate in Music Education, so I did.”

Smith went to Northwestern University and completed her doctorate in music education and has been working at Queens College for 12 years. She taught elementary and graduate method courses, composition pedagogy and music method for elementary teaching majors.

“I love teaching at Queens College,” Smith said. “My colleagues are great and I love the diversity of students here.”

Elected by faculty and Dr. Edward Smaldone, Smith became the acting director for the music department the spring semester of 2014. She was on the search committee and director of music from 2002 until 2016. The current director is David Schober, who started in September.

“Professor Smith is a dynamic personality in the classroom, in her scholarly work, and in her work in the school of music,” Schober said. “She cares equally for the students, the school, the college and her field.”

Her experiences in teaching music brought her to where she is now, and she feels a sense of fulfillment.

“Growing up in a small town in Maine, I never would’ve thought I would end up teaching in New York,” Smith said.