On Nov. 9 Queens College hosted a Veterans Day luncheon in which five veterans were honored for their service to their country.

The event opened with the QC student veterans in attendance leading the Pledge of Allegiance.

The event notably took place the day after the presidential election in which Donald J. Trump was elected. Lancman commented on the importance and the sanctity of the peaceful transition of power.

“[It] is secured by the men and women of our armed forces from the time of the Revolution until today,” Lancman said. “But nonetheless, we all appreciate that every person who has worn the uniform of their country has contributed to the safety, the security, the stability, the peace and the freedom that we enjoy.”

“I think it is so appropriate that we are having this lunch to honor our veterans and to thank our veterans the day after such an important election with the knowledge that on January 20th we will swear in a new president of the United States without a single shot being fired,” Lancman continued.

The honorees told stories of their experiences in the military and how those experiences shaped them into the individuals they are today.

Lesser served as a pilot during World War II, flying over 70 missions in a B-25 bomber over North Africa, Italy, Germany and France, including on D-Day. He is also a recipient of the Purple Heart medal, which is awarded to those wounded or killed in military service.

Lesser recalled his experiences from the end of the Great Depression and how Pearl Harbor and World War II shaped his life. 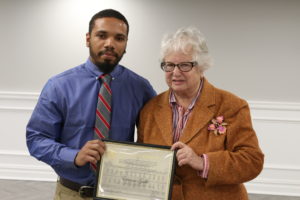 “We had just gotten through a terrible depression and things were good in our country,” Lesser said. “The song everybody would sing was ‘Happy Days are Here Again.’ A good president Franklin Roosevelt had us all singing that song and we had no interest in getting involved in what was going on in Europe at the time.”

“But Pearl Harbor came and that’s where I came in. I was a citizen solider. I was a foot soldier first and then I went to flying school,” Lesser continued. “And all those things made it possible for me to be here with you wonderful people today. I thank you for your service.”

Gullit came to the United States from Haiti in 2002 and went on to serve in the Army as a medic in Afghanistan.

He told a story of his experience and how he came to the realization that he would not be able to save the lives of everyone he came in contact with.

While serving in Afghanistan, a young Afghan girl who had suffered a gunshot wound to the stomach came into the medical station in which Gullit was working.

“She was too small, too weak and had lost too much blood. And the whole time I was thinking how could this be fair? The whole country was at war and this little girl died in her own home,” Gullit said. “For the first time I had to come to the realization that I can’t save everyone. People will die. No matter how smart you are, how strong you are, how fast you are.”

He also recalled the sense of regret and loss of purpose he felt once he returned to the United States, following his deployment after opting to not extend his time overseas.

“The second I got off that plane and stepped onto our countries land, I regretted it. I felt like I was a coward. I ran away when I could have done more,” Gullit said.

After some time, he came to the realization that he did not deserve to feel the way he did and worked to stop blaming himself for the things he could not change.

“No matter how bad you think things are, there is a possibility for it to get better,” Gullit said. “Because every time you think that you couldn’t continue, you can’t go on—you did it, I did it.”

“Don’t let fear change you or turn you into something you hate or make you have regrets,” he continued.

Before presenting the next award, Assembly Member Simanowitz expressed his gratitude for the service of veterans.

“Because of your sacrifice, I can do what I do on a daily basis. Your sacrifice and your commitment is integral for this country and it’s what makes this country the greatest country in the world,” Simanowitz said.

Argueta served in the Marine Corps from 2003 to 2007. After fleeing a civil war in El Salvador with his family, Argueta was motivated to join the Marines after the events of September 11, 2001.

“I am so grateful for everything that this country has done for my family that when September 11th happened…for me, joining the military, there was no question. It was something I needed to do and my two brothers followed me into the Marine Corps as well,” Argueta said.

Perkins has served in the military for over 25 years including deployments to Bosnia and Iraq. She is preparing for a final deployment to Afghanistan before she retires with 28 years of service.

She recalled the first time she knew the military was her calling.

“I remember the first time my father opened the door in his uniform after Vietnam and I knew right then and there that that’s what I wanted to do,” Perkins said.

Van Brackle received the final award of the afternoon. Van Brackle served in the Army as a military intelligence specialist and has deployed to South Korea and Haiti. He is also a QC student and has worked in the college’s IT department for 14 years.

He closed the event by expressing gratitude and the importance and sanctity of service to one’s country.