Forward Nation Radio, Queens College’s progressive political talk show, is taking the campus by storm, and has no intention of stopping there.

The show features the most up to date political event coverage along with fiery discussions about policies that directly affect the “average” American.

Damian Hardeen, a senior media studies major, created the show and credited the rigorous election season as the show’s basis.

“The inspiration for FNR was the insane state of political discourse, which was fueled by organized and domestic groups whose main objective was to spread mis- information in order to force a political outcome,in this case, winning at any cost,” Hardeen said.

Hardeen said his disappointment in the media is what pushed him to move forward in creating the show. “When you see such blatant audacity, double standards, purposefully deceitful rhetoric, and false equivalencies on display, daily, and in such a flagrant manner, you would hope the mainstream media would call it out for our nation’s sake and that didn’t happen. Instead, the absurdity of the Trump campaign was used to drive viewership and the media quickly became raven- ous gluttons for sensationalism. It was like our trusted media left us out to dry, and for what –increased ratings?” 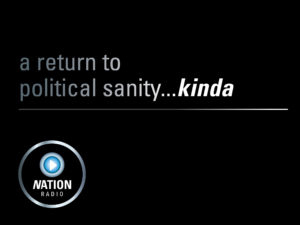 Amongst the political climate, Hardeen solidified his vision when he took a class with QC BALA Professor David Leventhal.

“Within 20 minutes, his passion for politics and his depth of knowledge on those matters became really apparent. He had a raw talent for delivering supercharged political discussion in ways that gripped the rest of the class. He wasn’t afraid to say it like he sees it.” Hardeen pitched the idea to Leventhal, who was on board immediately. With that, Forward Nation Radio began in full force.

The team behind the show consists of what Hardeen calls “the most informed, talented and driven students I could find.” The crew features Nicholas Brehl as the Director of Operations, Julia Adamo as the Director of Research and Development, and Carolyn Balcom as the Creative Director and graphics artist. The team also continues to expand, with its newest Copy Editor and Blog Writer Paula Volos, and volunteers Raphael Cooper (blog and social media writer), and Mario Brito who pro- vides the voice that kicks off and ends each episode.

The host of the show, Professor David Leventhal credited the commitment of the team as the reason for his dedication.

“It’s exciting and intimidating to be the voice behind Forward Nation Radio. It’s also more stressful than I thought it would be. Part of it is the people committed to this project. They are working so hard that I feel like I can’t let them down,” Leventhal said.

The show, as described by Professor Leventhal, is “an alternate to fake news and it is hon- est and clear, with a progressive perspective.” This is a core value of the show, as Hardeen cites that Forward Nation Radio is not beholden to any party or group. All the data provided on the show “is quantifiable, the facts are fully researched to be accurate and we reference only reputable sources such as the Pew Research Center.”

When asked about why people should trust him, Professor Leventhal answered, “I guess to some extent they shouldn’t. But you should always be careful in who you put your trust in, not just me. I do think I have credibility and speak against my own inter- ests. I have a track record of being informed and being thoughtful about the conclusions I reach.”

Professor Leventhal also credited his liberal views as a major factor in his informed position. “I’m a liberal. That means I can’t make up my mind, which is why I’ve had so many jobs. They’ve led to my progressiveness and helped me evolved and become informed.”

Hardeen emphasized the importance of the show is to accurately inform the public. “As a nation, it’s imperative that we are accurately informed. The current administration is actively looking for ways to silence their opposition, so it’s important to be heard.”

Leventhal shared this sentiment and said, “Honest news sources are more needed now than they’ve ever been. The flood of fake news is extraordinary, more honest voices will help lead to better decision making and, ultimately, a better society.”

When asked if he has fear toward speaking out on certain issues, Leventhal responded, “I don’t tend to think about these things. A sobering moment was when my wife watched the second show and asked me not to use my children’s names. That really woke me up and made me wonder whether one day down the line my kids would get bullied for something their dad said.”

Nevertheless, Leventhal continued to encourage activism. “You can’t have fear during this time. I understand it, but you can’t let it intimidate you. If fear keeps people from speaking up for what’s right, then we’re lost and our future is bleak. Right now, it’s never been more important for people to protest and be informed.”

Hardeen shares this belief. “Being complacent doesn’t work when the actions of the super-wealthy and elite go un- checked or unchallenged. The one percent is not interested in sharing any of that wealth. The time for being quiet has most certainly passed because of our current state. Now presents an opportunity. Now is the time to get loud.”