Diversity in leadership is equal to breaking stereotypes in a society where certain group of people tend to dominate whether it’s in business, educational fields, or the army. It’s a moment to be proud of when people of all different kinds of race and background are welcomed.

Queens College experienced a moment like this when Major Tejdeep Singh Rattan came to visit and shared his life experience about joining the army and a Q&A session with students. Major Rattan was one of the first few Sikhs who could keep his articles of faith, such as his beard and turban, while still serving the US army.

“I have earned my promotion to Major and this further demonstrates that observant Sikhs can thrive in the U.S. Military with our articles of faith,” Major Rattan stated.

Major Rattan was rejected three times before getting in the fourth time and was also the first Sikh after 30 years to attend the army’s Basic Officer Leaders Course.

“From the 1980s until 2009, I was the first Sikh who went for basic training. The fourth time, I met a recruiter at Fort Hamilton, NY who helped me out with the process of getting into the military. We had to convince the army why practicing Sikhs should be allowed and the Sikh Coalition helped us out.”

One of Major Rattan’s main hurdles was uniformity. Even though he could pass the hurdles with the gas mask, he still had the same question in his head.

“How can a man wearing a turban stand in a battalion and stand out and be part of that uniformity?” This turned out to be the barrier.

His mentor told him that he must do his best in whatever he does. After passing his physical tests, people slowly started accepting him. His motto is that you can’t give up. However, Major Rattan said that once you work with the armed forces, people are open-minded because they know that you don’t mind taking the bullet.

Social identity played a huge role in his life as a soldier because there was a parallelism between his values as a Sikh and the military values.

“Leadership, honesty, integrity, selfless service, personal service. Do I have any of these values is what I asked myself and it happens to be that the values I grew up with are like the military values. That’s how I relate the role of my social identity and parallel it with the way of my life or at least try to.”

Major Rattan surpassed his hurdles and join the US army with respect to his faith and values. 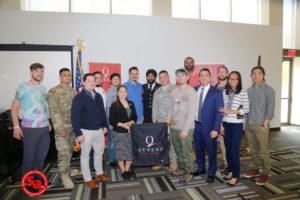 “There are more than 100 clubs focusing on many aspects. We have clubs such as Hillel, MSA, and Caribbean, HSA, Sikh Club and many more. There are a lot of clubs that focus on different religions and in that sort, you can just see the diversity and the different ways of life of how things are going on. In that aspect, Queens College itself is a melting pot just like what they call New York City.”

Japneet Singh, who won the re-election for Students for Change in Student Government, shared how diversity in leadership is very crucial.

“Being a Student Government president on campus allows different perspectives to be on the table. You don’t want to lead with just one perspective, you want to have different perspectives. For example, QC has over 20,000 students and not all of them are one ethnicity, but a lot of different groups that attend this university. We want to make sure that we get everyone and not just one specific group.”

Diversity has increased over the years and Major Rattan said how he has no regrets with the way he lived because he lived the way he wanted to live and served his country. When thinking of activities in NYC, many