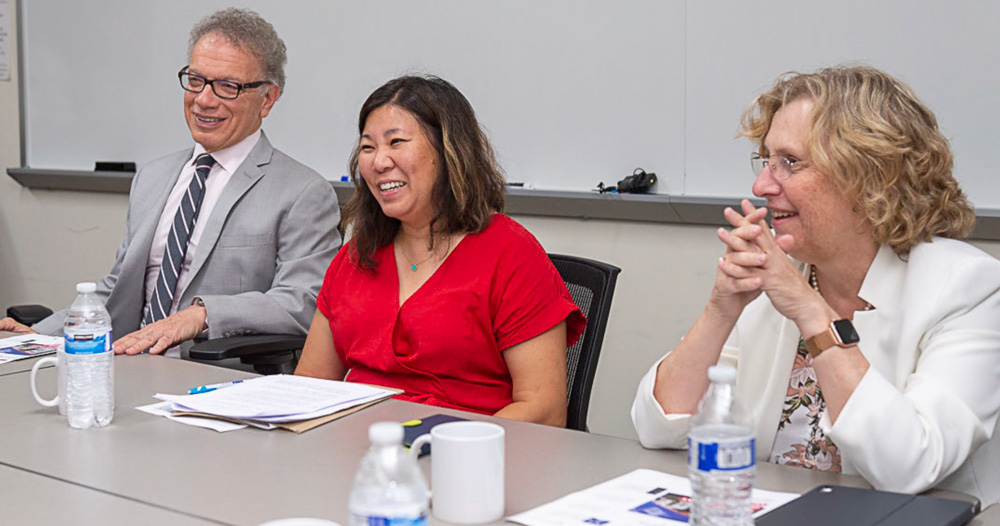 “In order to be a good leader… you need to be a good manager, [and] have a vision of where you want things to go” said Dr. Elizabeth Hendrey, the Vice President of Academic Affairs and Provost for Queens College. Hendrey recently agreed to sit down with The Knight News to discuss her history at QC as well as new initiatives being implemented on campus.

Hendrey started off by explaining her role at QC, since as she jokingly said, “nobody knows what it [Provost] does.” Hendrey explained that as Provost, she is the chief academic officer for the college, overseeing faculty, academic departments, the center for ethnic and religious understanding (CERRU), honors and scholarships, the academic support center, curriculum matters, career engagement and internships, the library, international programs and more. She then went on to detail the recent re-organization of her office, which now includes three associate provosts each handling different divisions of these responsibilities in conjunction with her.

However, QC was not Hendrey’s first stop. As an undergraduate, Hendrey initially majored in chemistry at Princeton University. After realizing chemistry didn’t suit her, she switched her major to economics. Hendrey subsequently pursued economics eventually receiving an M.A. and Ph.D in that field from Duke University.

Hendrey then started her career at QC in 1995, serving as an assistant professor in economics. She was then promoted to professor in 2001, became a department chair in 2003 and served as the Dean of Social Sciences from 2005-2012. Hendrey then became acting provost from 2013-2015, before officially becoming Provost in 2015.

Given the 20 plus years Hendrey has spent at QC, she has gotten a good sense of how QC has evolved over time. According to Hendrey, “[QC is] an engine of economic mobility… and has always attracted students from very diverse backgrounds.” She went on to say that, “We are a majority minority institution… [we are] Asian American and Hispanic serving, which was not true when I came to [QC].” She then explained how Queens has changed academically, stating that there’s more STEM (Science, Technology, Engineering and Math) majors and more business enrollment.

Hendrey elaborated on the business enrollment aspect noting that, “When I became chair [of the department], CUNY came to us [QC] and asked us to develop a business program. Prior to that, [CUNY] Baruch has had the monopoly, so we developed the Bachelors in Business Administration (BBA) program, which is now over 15 years later going strong.” Hendrey noted that this a gratifying point in her career that convinced her to do more in administration.

Hendrey also discussed several great initiatives at QC, some of which are in progress and some which are upcoming. NAVITAS, an upcoming initiative, a pathway that allows for greater opportunity and access to global perspectives in the university community via international students, is now in partnership with QC. This partnership allows for QC to host international students to study on our campus.

According to Hendrey, “This is our first (NAVITAS) partnership in New York State. We expect the first cohort of students to be arriving in spring 2020. It’s an initial 5 year contact and we expect it to be a long term partnership. It’ll be a small cohort but it’s an opportunity for us to build national ties.” Additionally, she added, “This partnership enhances the college’s goal for international relations and it also helps for in-state students who want opportunities abroad.”

Hendrey also detailed an initiative called the Freshman Year Experience Class (also for transfer students) which provides courses for incoming students in areas of potential interest, as students often have trouble properly identifying what field they would like to pursue. The course is currently ongoing and is entitled QNS-101, with additional courses to come in the spring. According to Hendrey, these courses are also able to overlap with the pathway requirements for graduating.

After gaining a better understanding of Hendrey’s position, her initiatives and her history, Hendrey explained her definition of success. For Hendrey, “success resides in the success of the people that I oversee… the faculty do amazing work, to see how they’ve grown and the promise they’ve shown turning into research & publications.” In short, to her, success is shared upon the shoulders of those who work toward it.