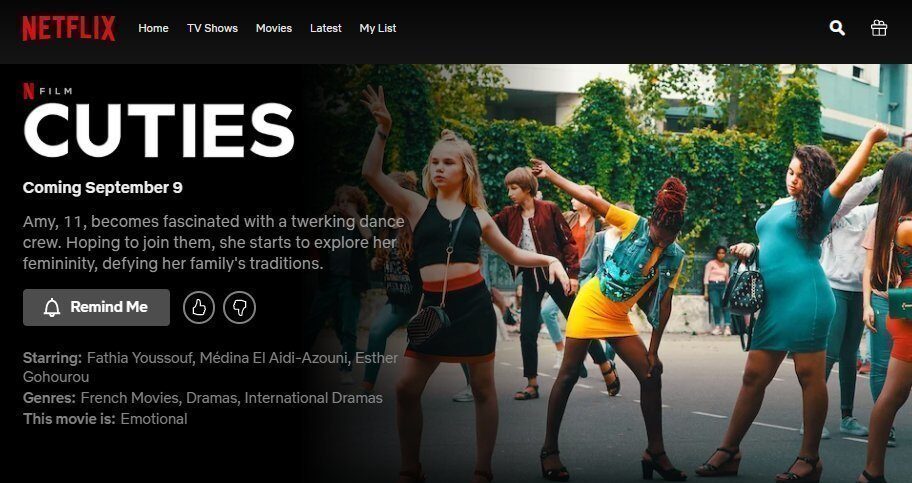 Controversy surrounds the release of Cuties in the United States

By Ralph Matamoros and Samantha Galvez-Montiel on October 14, 2020

Despite a great deal of controversy surrounding its release, the film “Cuties” was made available to viewers in the U.S. in early September. Regardless of the negative reputation that has developed around the film and its director, Maïmouna Doucouré, “Cuties” tells the unique coming of age tale about Amy, an 11 year old girl struggling to define what growing up and womanhood mean to her.

When Amy learns that her father is marrying another woman and bringing her to live with the rest of the family in France, she begins to deliberately reject her family’s values and seek guidance elsewhere. Around the same time, Amy befriends a group of girls known as the Cuties. Amy initially meets the girls while grocery shopping, where she sees them playing tag in the aisles of the store. As she watches them running seemingly carefree around the shop, Amy starts to get the idea that joining these girls would grant her freedom from the family values she has come to resent. However, although the Cuties seem to provide a source of liberation, in reality they are just another group that seeks to control Amy and her developing set of morals.

A main theme of the film surrounds Amy’s search to define womanhood, a concept prioritized both in her family’s values and those of the Cuties. The steps toward becoming a woman at home are dramatically different from those required to be a woman in the Cutie’s world and Amy is forced to try to reconcile the two contradicting influences throughout the film. As a result of this confusion and a lack of information from home, Amy and the other Cuties begin to conflate womanhood with what they find online: sexualized dancing and similar behaviors. The director of the film continuously addresses the issue that children are sent mixed messages about who they should be as they grow up, and does not shy away from  having Amy and the other girls partake in provocative behaviors in order to convey her powerful message.

Much of the debate regarding the film was sparked by the initial poster Netflix used to advertise, with some Netflix users accusing the corporation of oversexualizing the young actors in the film and in extreme cases, normalizing pedophelia.

“Responding to the controversy regarding Maïmouna Doucouré’s Mignonnes/Cuties is challenging, because while the film itself deserves attention, given its insightful take on race, immigration, and adolescent female sexuality, the backlash had absolutely nothing to do with the film at all,” said Professor Amy Herzog of Media Studies at Queens College.

“Netflix did a great disservice to Doucouré with a promotion campaign that undermined her entire project, taking the most sensationalized imagery of young girls dancing out of context.”

Although the film does take a stance against sexualizing children, there are several scenes throughout the film that can certainly make the viewer uncomfortable. The scene showing the Cuties dancing in their competition has been particularly criticized for sexualizing the young actors, resulting in many people threatening to cancel their Netflix subscriptions.

“There is a long history of European films in general and French cinema in particular prompting a backlash and censorship efforts in the U.S.” said Professor Benjamin Strassfeld of QC Media Studies who has also been following the controversy surrounding the movie.

“Cuties is only the latest, but the fact is that when films move across national and linguistic borders, things get lost in translation, with, in this case, American audiences frequently failing to understand the nuances of foreign-made films like Cuties,”

The film certainly has been sparking a reaction in the United States. Republican Senator Ted Cruz of Texas called for the Department of Justice to open an investigation into whether Netflix broke federal laws against child pornography, and on September 23rd a grand jury in Tyler County, Texas indicted Netflix on charges of “promoting lewdness.” However it is contemplated that despite the controversial nature of the film, much of the backlash the movie has received is due to how it was advertised, as well as a disregard for the fact that it’s a foreign film with very different taste than American culture, rather than the actual content.

Published in News, This Week's Paper and World News