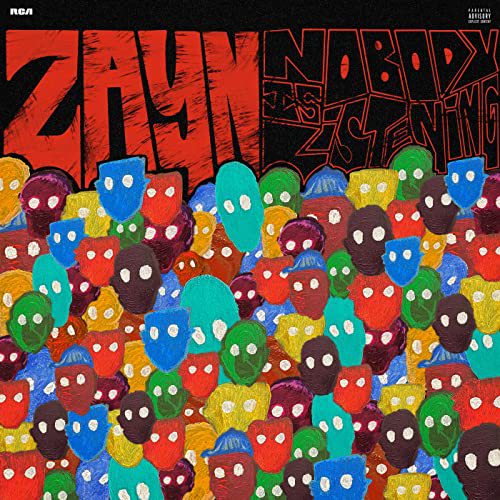 Zayn Malik was the first to leave One Direction to pursue a solo career in 2015. Since then, he has released two albums, Mind of Mine (2016) and Icarus Fall (2018). Zayn kicks off the new year with his third solo album. After his departure from the famous boy band, listeners wondered if Malik’s post 1D life would fulfil his apparent expectations. The title of this third album Nobody Is Listening says it all: He is wondering if anybody is still listening to him.

Although the title of the album alone manages to convey Malik’s message effectively, the album’s cover is a breathtaking addition to the theme. Designed by the musician himself, it is inspired by a unique expressionist style of graffiti. By crowding the front of the cover with intensely blank faces set upon a dark background, the art creates the feeling of a  dark sense of solitude even among a crowd. The faces further depict the emotions the album invokes: that of being lost in a crowd and desperately trying to be heard.

Nobody Is Listening contains a total of 11 tracks. The first, “Calamity,” is in the form of a spoken-word poem. Malik sings, “My brain lives with cannabis/Can I resist the dark abyss/Leave a mark on this with no start, just exist”, using the back and forth of the broody rhythm to express a myriad of themes, including sensuality and smoking. The album contains a mixture of Pop and R&b, which together lend a soothing breeziness to the soundtrack, allowing for the lyrics to be both heard and felt as the artist carefully punctuates his words with piano chords.

Despite its somewhat broody introduction, Nobody Is Listening portrays both the restraint and personal growth of the artist, possibly as a result of the 28 year old Malik recently becoming a father. Despite this recent and drastic change in the singer’s life, the album’s songs seem to be more reflective of his relationship with longtime partner Gigi Hadid than of his journey into fatherhood.

There are a few songs in the album that indeed hint at the singer’s complicated past as well as his future plans for his relationship with Hadid. “Better” is a sweet, intimate portrait of second chances and “Outside” depicts him begging for forgiveness, both songs likely referring to the process of the couple’s reunification after their breakup. The emotions of each of these songs are front and center, culminating with “Connexion” in which Malik confirms that he is ready to “go headfirst into the unknown”, possibly hinting at the thought of marriage with Hadid.

As with his previous albums, the artist continues to serve up some irrepressibly lustful R&B moments. “Windowsill” is both the dirtiest and catchiest song on the album. Malik allows the song to revolve around the pulsating backdrop of a slow drum beat while singing soft descriptions of skin pressed against skin, a song sure to set the mood for any romantic encounter. Although Zayn thinks that nobody is listening, if does not matter, because in these moments he only has one person in mind.

The album culminates with two of the most inspired songs, “Tightrope” and “River Road”. “Tightrope” is essentially a love song, in which the artist adds his own cultural touch by incorporating verses in Hindi. He sings the verse over simple guitar strums, repeating verses often in order to add to the soothing simplicity the song offers. In “River Road,” Malik delivers a sobering vocal performance as he sings about his future, replacing the acoustic guitar with an electric one for a more boisterous sound.

This album as a whole speaks to who Malik is becoming. Despite earlier challenges in his career, he has a sense of direction and is prepared to embrace the difficult and solitary task of being a solo artist. The artist’s cryptic message that Nobody Is Listening has certainly been changed by the release of this album, since everybody is listening to this collection of breathtakingly expressive songs.