There were 11 performances, and they ranged from poetry to dance. Yet all who performed wanted to talk about the experience of being an undocumented immigrant in the United States.

A report released in January by the Center for Migration Studies found there are nearly 11 million undocumented immigrants in the U.S.

“It’s a platform to get everybody’s emotions and voice out and heard by the community,” Guzman said.

Priscilla Lee, a senior majoring in urban studies, was one performer. She talked about coming out as undocumented.

“I actually came out two years ago, and it was because of the DREAM Team,” Lee said. “It was amazing.”

Lee stressed it is important to find a purpose in life and being undocumented helped her find that.

“Being undocumented taught me there is a reason for everything and there’s a reason why you’re here,” Lee said.

Giovanna Quilapanta, a senior, showed her life story through a slideshow. She told the audience that, despite the challenges she faced as undocumented, she is still a person.

“I am more than a word. I am a human being,” Quilapanta said.

Quilapanta also highlighted different issues and people. She compared New York and South Carolina’s diversity. She talked about President Barack Obama and her work ethic. She explained changes made to the Deferred Action for Childhood Arrivals, which provides a work permit and deportation exemption for undocumented students if they arrived to U.S. before turning 16.

Once her presentation was over, Quilapanta received applause not only from the audience, but also from fellow performers.

“One thing that will stick in my mind and, that I was very shocked by, was Giovanna’s performance. She pulled out her presentation, and she explained our T-shirt—‘Coming Out of the Shadows’—word for word,” Lee said. “That was amazing.”

Another performer, Dulce Hernandez, a junior majoring in graphic design major, read a poem about her family, struggle and the definition of undocumented.

“It is necessary to promote awareness to other people who don’t have any knowledge about what being an immigrant means, or the struggle people are going through,” Hernandez said.

Lee said there still existed a lot of problems for undocumented people in communities, but felt glad an event like UndocuMic existed to connect the two.

“There are a lot of issues that impact our community and one of them is undocumented immigrants. People have stereotypes about immigrants and they don’t know who they are, or what their story is. UndocuMic is a way to break the vices. So people see who these immigrants, that they think are bad, really are,” Lee said. 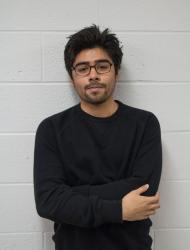