From Jan. 15 to Jan. 19, under the supervision and guidance of educators who worked with Dr. Martin Luther King Jr., a group of Queens College students went on a five-day journey through the historic landscape of the civil rights movement.

The students traveled from Atlanta, Georgia to Birmingham, Alabama with stops in Selma and Montgomery along the way.

The event, titled “In the Footsteps of Dr. King,” offered students the opportunity to travel to major sites of the civil rights movement and was organized by Rabbi Moshe Shur, a senior associate for the Center for Jewish Studies and adjunct professor of history at Queens College . Shur was personally involved with the Southern civil rights movement in 1965 and 1966.

Peter Geffen, a QC alumnus, and Dean Savage, a sociology professor at QC, joined Shur to take part in the movement, volunteering with the Southern Christian Leadership Conference and working with SCOPE, the voter registration project.

Rory Lancman, Council member for the 24th District of the New York City Council, thanked and congratulated the students for going on the trip, expressing how delighted he was to provide the financial support that could allow students to walk in King’s footsteps.

Students, faculty, and members of the QC community gathered in the Student Union on Monday, Jan 27, to listen to the reflections of the students and staff who went on the journey. 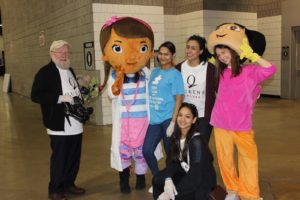 The students discussed their experiences volunteering with Hosea Feeds the Hungry, marching in King’s footsteps, including walking over the Edmund Pettus Bridge, and visiting Martin Luther King Jr.’s birth home.

Raisa Luma, a junior studying communication sciences and disorders, said if she could describe the trip in one word it would be “necessary.”

“What impacted me the most was how unwavering these people were to the cause of the equal rights. So many of these people were young, many like us and determined for the cause,” Luma said. “I’m sure that all of us that attended the trip believe that equal rights must be extended to all citizens, but I am not sure if we would’ve made it. Being spat on, your families being threatened or killed, having all these disgusting things being said to you…I don’t think that I would’ve had the composure not to lash out at people.”

Randall Yu, a student who grew up in China, an authoritarian country, views himself as a very political person and is very interested in the civil rights movement.

Yu compiled a PowerPoint presentation filled with pictures that had affected him the most, relating the experience to the history of his home country.

“I felt so emotional so many times. In The Center for Civil and Human Rights in Atlanta, I experienced the sounds that African Americans had in the segregation era,” Yu said. “For instance, when blacks tried to sit with white people at the bar, they received physical and verbal abuse such as whites cursing at them and pouring beer on them as well as giving them beatings. I also saw many depressing things regarding the Chinese government and it’s civil rights movement; it was very depressing to see.”

Jessica Baltazar, a student majoring in applied linguistics, said she wanted to gain a better understanding on Martin Luther King Jr. and the civil rights movement as a whole.

“My understanding was at a surface level. I wanted to change that, I wanted to go deeper,” Baltazar said. “Along came this great opportunity to travel through it all.”

“Some of the most memorable mo- ments was when I explored Martin Luther King Jr. National Historic Site in Atlanta and saw all forms of segregation, or sitting on the steps of Dr. King’s home on Auburn Street, and better yet getting a tour of the inside of his home where he ate, slept, and prayed. Then there was Ebenezer Baptist Church, where I couldn’t believe I sat in the very church where he preached,” Baltazar continued. 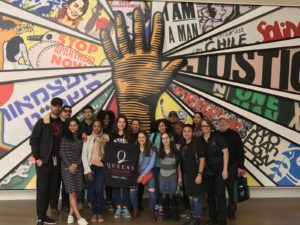 Cheyna Mulligan is a junior majoring in Media Studies. Email her at cheyna[at]theknightnews.com.

“Seeing Dr.King and what he went through makes