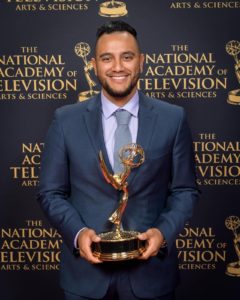 William Gallego has been nominated for three Emmy awards and had the honor of winning one. The former Queens College student has returned to the school to teach as a journalism professor. With a passion for visual storytelling, he teaches students the relevance of broadcast journalism.

Gallego works as a full time producer at ABC and is fortunate enough to take on other projects that allow him to travel around the world and tell the stories of others.

The 27-year-old of Colombian descent is a journalist, television producer, and professor. Being proficient in multitasking, he took on numerous opportunities that expanded his knowledge in the field and helped him gain more experience.

“I worked hard enough to get to the point where I am now, where I am allowed to do what I do. However, when I was in college, I worked really hard,” said Gallego. “There was a point when I had two internships and a job working 32 hours (a week) at Costco. I was the Editor-in-Chief of The Knight News and a full time student at Queen’s College.”

When Gallego was a freshman at Queens college, he took liberal arts courses until he found a field of interest. After taking Journalism 100: Meet the Press with Professor McCormick he was inspired to pursue a career in journalism. Gallego maintained straight A’s in all of his journalism classes, along with the other courses he needed to obtain his bachelor’s degree.

“McCormick was the first media/journalism professor that I’d ever had,” Gallego said.  “After taking his class, he made me want to pursue journalism because he made it fun. Seeing how passionate he was about the subject made me realize how passionate I was about it, too. I just didn’t want to let him down.”

Growing up in a household with a single mother, four sisters and a niece, he had to make sure that he contributed to his family. Aside from helping to support his household, he put himself through college. It became very complicated at times to juggle so much at a time, but he prevailed and made no excuses for his circumstances.

“People just can’t be afraid to take on more work; there are 24 hours in a day so try and make the most of it,” he said. “It’s all about paying your dues, doing the hard work now so that 10, 15 years down the line you can see the proof of your labor. I remember not having any writers for The Knight News and I wrote every story just so that just so that it could keep running.”

Gallego’s commitment to his academics and focus on building a career during his undergraduate time at QC lead him to numerous internships and experiences that helped shaped him into the person he is today. ABC allowed him to become a part of the Herbalife investigation, where he worked for 8 months to get the full story. He and his team investigated the company and exposed how they had been violating health regulations to recruit people. After developing the segment, which aired on Nightline, he was awarded his first Emmy in 2015. He also had two nominations for a story he worked on with a company called Fusion. The story focused on sex trafficking In New York City.

Gallego has not exclusively worked in investigative journalism. He has also worked on music video sets such as “Blurred lines” by Robin Thicke featuring Pharrell.

“I can’t stress enough how important it is to go out and network, meet and get used to talking to people,” he said. “Do all the little things that other people aren’t willing to do. It’s all about building blocks and everything leads to a next step.”