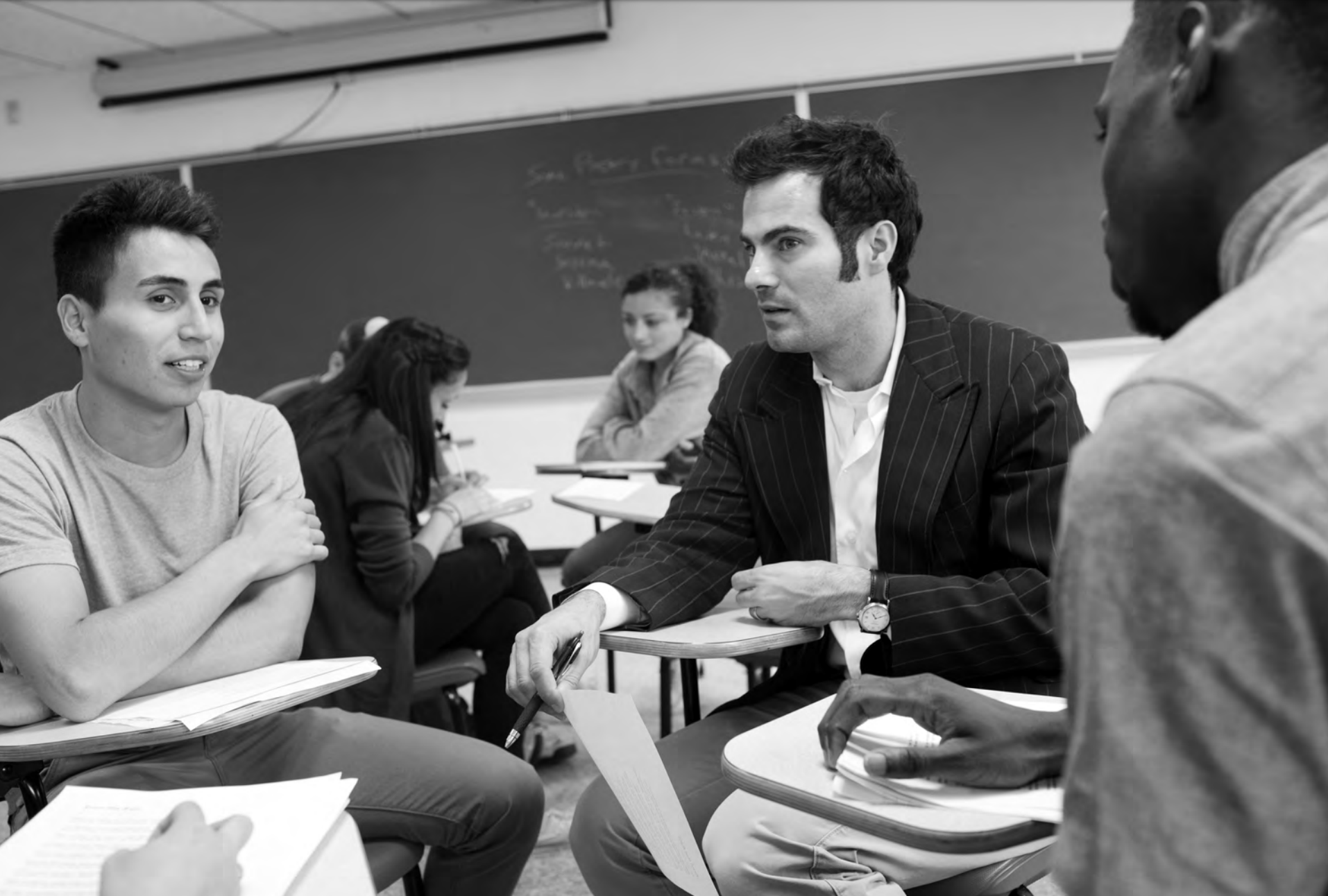 As professor, academic scholar and award-winning poet, Roger Sedarat has established himself as an esteemed member of Queens College’s English Department. Yet, before developing the first Middle-Eastern American Literature course on campus and contributing scholarship on the hybrid crossing of Persian and American writing, Sedarat was an undergraduate student taking orders at a fast food drive thru in Texas.

“I had a very unconventional academic upbringing. With zero money to attend college, I was lucky to attend a good state university, but I had to work at a Wendy’s drive thru, followed by work study and various temporary jobs to afford school back then,” Sedarat recalled.

Although he currently devotes a professional and academic career to literature, it wasn’t until graduate school that Sedarat pursued a degree in English.

“I’ve always been obsessed with reading and writing, especially poetry,” he said, “but as a child of an immigrant, I thought I’d have to follow my father’s plans for me to make a lot of money.”

While attending the University of Texas in Austin, Sedarat started out as a business major, until one college professor encouraged him to switch to the liberal arts.

“I had this awesome sociology professor, a graduate student getting her PhD. She was doing amazing research in Nicaragua. This was during the 1980s, the Reagan years, when the U.S. was supporting rather horrific causes in South America, presumably to fight communism. Anyway, she’d show us movies she’d shot herself, interviews with Sandanistas. It was incredible as far as getting me to think about what was happening in the world, and the causes of such events.”

It was only later in the semester, after his professor presented evidence on how Ford knew that many people would die from a design flaw in his early American economy car, the Ford Pinto, that Sedarat abandoned his studies in business altogether. “Lee Iacocca, the leader of [the Ford] company at that time, had been one of my father’s business heroes. That day, I went to the liberal arts department and changed my major to sociology,” he said.

Even while pursuing a degree in sociology, Sedarat found outlets for his passion in reading and writing elsewhere, tracing the roots of his studies in the Iranian literary tradition to the resources made available to him in college.

“There was a strong Persian studies program at my university, and that did serve to better inform my reading in my other literary tradition, even though I didn’t really intensely study the poetry of Iran until graduate school,” he said.

However, it wasn’t his interest in sociology or his side-pursuit of literature that defined Sedarat’s college experience; rather, it was his strong passion for music. “I was singing in various bands. Rock mostly, but punk too. One of my bands had a regular gig on 6th Street, the big drag in Austin, Texas.” He was so confident in the eventual take-off of his music career that he turned down a major academic opportunity, “One evening I got a call from the head of the Sociology department, asking me to join this liberal arts honors program based on my academic performance. He told me students who pursue it end up in top graduate schools. I remember thanking him while politely declining, thinking to myself I was going to hit it big with music,” he said.

Though he never was able to make a name for himself in the music industry, things turned out more than alright for Sedarat. After graduating from UT Austin, he decided to move his passion for poetry to the forefront and received his MA in English/Creative Writing at Queens College, as well as a PhD in American Literature from Tufts University.

Since then, among academic journal and book publications, Sedarat has released four poetry collections: “Dear Regime: Letters to the Islamic Republic” (2007), “Ghazal Games” (2011), “Foot Faults: Tennis Poems” (2016), and “Haji as Puppet: an Orientalist Burlesque” (2017), which recently won the Tenth Gate Prize for a Mid-Career Poet.

As for his allegiance to poetry, Sedarat states that it traces back to his Persian roots, “In Iran, poetry matters in ways that it never really has in America. But then I pursued a PhD in American literature, all the while reading and writing Persian verse. My hybrid identity as an Iranian-American poet who grew up mostly in Texas really led to a lot of personal conflicts. This led to me trying to reconcile, and also oppose, my two poetic traditions. As one critic said of my work, I put Rumi next to Wallace Stevens.”

As for his professional career, Sedarat has been a professor at QC for ten years now, teaching in both the undergraduate and MFA programs. Not too long ago, Sedarat was even able to develop a course on Middle Eastern-American literature, which he has taught to both undergraduate and graduate students.

Upon reflection, what stood out most to Sedarat about teaching the course was the diverse group of students it brought together. “We had Jewish students and Muslim students, those from various countries in the Middle East and those who knew very little about the culture or literature from the region. We not only all got along while discussing the material, but we had one of those inexplicable experiences of really bringing ourselves fully to the class, both intellectually and emotionally. I didn’t so much as teach as get out of the way, facilitating great student insights. When it came time for peer review of our final papers, we all went to eat falafel at a nearby café,” he said.

It is precisely this experience of “really bringing ourselves fully to the class” that Sedarat hopes students remember after taking one of his courses: “I think a lot about the professor who motivated me to change my major. That wasn’t really her intention. She just showed up to share her passion for the material. I think I’d most like to be so engaged with a poem, maybe some critical or theoretical problem, that a student would find himself or herself influenced…in a really life-changing way.”

Sure enough, it has been the material Sedarat contributes to his classes that has stuck with former students. Jeeon Zaki, a senior double majoring in English and economics, still remembers the very first lesson Sedarat began his creative writing class with. “After a brief introduction to himself, he segwayed us into the actual work through a compelling request to ‘show’ instead of ‘tell’ the reader during future assignments. He did this by playing Notorious B.I.G’s ‘Juicy,’ and pointed us to moments in the song where the renowned rapper states, ‘Puttin’ 5 karats in my baby girl’s ear’ as opposed to merely declaring, ‘I am now wealthy.’ His lesson plans were always intriguing, as the texts we engaged with managed to keep my attention fairly consistently throughout the semester—and this isn’t a very common occurrence, by the way,” Zaki said.

Other students, such as recent QC graduate, Jessica Cedano, remember Sedarat for his acute attention to their writing. “Professor Sedarat is the kind of professor you hope every college student has the pleasure of getting to know. He possesses the unique quality of seeing any piece of work and knowing exactly where it could use improvement. He truly brings out the best in his students, things you never thought were there…He has changed the way I write. He has changed the way I think about what I write,” she said.

“It’s been a great life in academia,” Sedarat has ultimately said of his career. Indeed, it has.