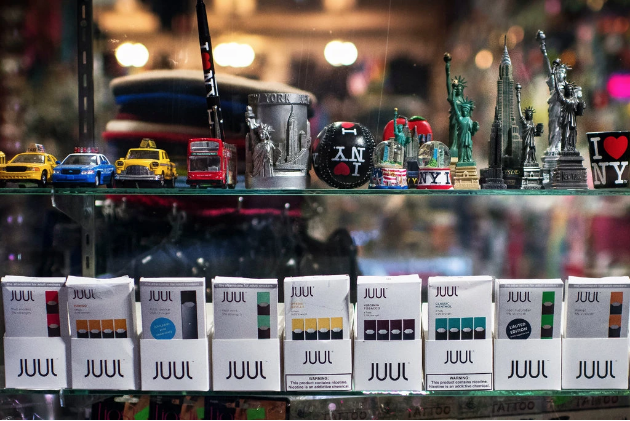 By Veronica Kordmany on December 5, 2018

It seems as though every teen’s nightmare is starting to become a reality. In Nov. 2018, the e-cigarette company Juul Labs, more commonly referred to as Juul, announced they would be cutting back on promoting the unhealthy addiction of vaping.

According to The New York Times, about three million middle and high school students reported using e-cigarettes in 2017. A huge deciding factor for users were the flavored-pods that Juul sells, which makes the product all the more appealing in comparison to regular cigarettes.

Juuls, known as “the iPhones of e-cigarettes,” are slender rectangular objects with a built-in compartment for pods, which are sold separately.

Originally, the purpose of e-cigarettes was to help smokers combat their cravings without the harmful ingredients found in tobacco. Through social media advertising and marketing to retail stores of a large variety, ranging from gas stations to malls, Juul Labs used their platform to market directly to teens, a fact criticized by public health officials.

Juul has taken the first steps in dismantling their social media presence, starting with Facebook and Instagram in the United States. They have since enlisted the aid of Twitter and Snapchat to “help them police posts that promote [Juul] by underage users.”

The company, based in San Francisco, holds about 70% of the e-cigarette market in the United States, the NY Times reports. Most of their sales came from non-smoking teens that developed nicotine addictions. The Food and Drug Administration had been conspiring relentlessly against the vaping manufacturers, battling mostly with Juul, to help kick adolescent addiction to the curb.

Chief executive Kevin Burns tried to defend the company against the FDA, saying, “Our intent was never to have the youth use Juul — the numbers are what matter and the numbers tell us underage use of e-cigarettes is a problem.”

Despite his statement, an investigation of whether Juul knowingly sold to minors is still underway. The New York Times quoted Maura Healey, attorney general for Massachusetts, who said, “Our investigation into Juul’s practices, including if it was knowingly selling and marketing its products to young people, will continue.”

In Sept. 2018, the FDA gave Juul, as well as other e-cigarette manufacturers, the chance to redeem themselves: in a maximum time of 60 days, each targeted company was to submit a plan to keep vaping products away from minors.

A new measure Juul is taking is an improved version of their verification system. Supposedly, by the end of the year, customers will have to provide real-time identification to be compared to a government ID. In addition, shipments in bulk will be minimized to two devices, with 15 pod-packages, per month.

Burns also stated that the company would halt retail orders for some of their most popular flavors, which include mango, fruit, crème and cucumber. The cuts will result in the multi-billion dollar brand losing about 45% of retail sales. Juul is planning to compensate for the decline in sales with their new age-technology, although the timing surrounding this claim has yet to be announced.

Other companies in the vaping industry have worked quicker than Juul to stay out of the FDA’s warpath. Altria announced last October it would discontinue majority of its flavored products, while terminating some altogether. The changes didn’t stop there. Altria reversed their stance on selling to people under the age of 21 — something they initially resisted.

British American Tobacco’s R.J. Reynolds Tobacco Company followed suit, according to the Times, sending the FDA plans to revise their age limit. Michael Shannon, a spokesperson for the company, announced the company would not market through its social media platforms, and that they would incorporate the age-verification process, like Juul, for online shoppers of e-Vuse, an e-cigarette invented by Reynolds.

The measures taken by R.J. Reynolds stopped short of their sales. Vuse, a flavored e-cigarette that comes in a variety of flavors, most notably berry, will continue to be sold in retail stores. Shannon answered to this decision by saying that the company “would enforce contractual penalties for retailers that sell tobacco products to youths.”

Retail stores will be kept on their toes with the company’s new “mystery shopping program” — a concept conceived to check for compliance.