On Wednesday, Feb 15 the Office of Student Development and Leadership at Queens College welcomed Olympic medalist Ibtihaj Muhammad to talk to a packed ballroom about her fencing career as a minority.

Muhammad, who graduated from Duke University in 2007 with dual majors in International Affairs and African Studies with a minor in Arabic answered questions from staff and students about her journey in life and how it might have changed now given the current political climate.

With a sizeable Muslim population on campus, Director of Student Development & Leadership at QC and the event’s coordinator, Judith Krinitz, made it her mission to bring a speaker for Black History Month that would leave a strong impact on the diverse student body.

“Ms. Muhammad represents all of us,” Krinitz said. “She is unapologetic about being a hijab-wearing Muslim and many of our students wear head coverings for religious reasons as well as modest clothing.”

China Jude, the assistant vice president for athletics at QC, introduced the Olympic medalist and highlighted a few of her major accomplishments over the years.

“Muhammad is a member of the United States fencing team and currently ranks number two in the United States and number seven in the world,” Jude said. “‘Time’magazine put her on the magazine’s top 100 influential people list of 2016.”

In August 2016, Muhammad was not only the first American woman to compete in the Olympics with the hijab, a religious headpiece worn by practicing Muslim women, but also the first woman of color to be on the US women’s sabre fencing team. 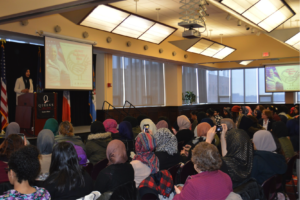 Only days after President Trump signed the travel ban banning entry to the United States from seven Muslim majority countries, Muhammad was held and questioned at U.S customs.

She wanted to reassure students that fear wasn’t an option and they must stand up for one another.

“I’ve always been black and I’ve always been Muslim,” Muhammad said. “Especially as an African-American, we’re kind of used to being subject to profiling and these types of things that now Muslims are experiencing now in this moment. This isn’t something new. And while it’s frustrating and infuriating, I feel like it’s my duty to stand up for people who look like me. And those are the values I was raised with.”

“I thought it was very inspiring and motivating to me, especially because I’m such a big sports fan and I’ve always wanted to become an Olympian,” Ali said. “Seeing Ibtihaj speak passionately about her experiences, what she faced, and how she overcame all those difficulties just made me that much more excited and motivated to actually pursue being involved in sports as a Muslim hijabi.” 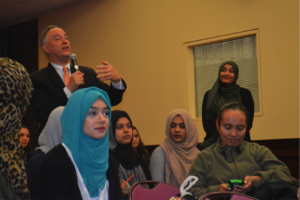 “Growing up in my school district, we were not taught about African-American history,” Muhammad said. “It was important for me to seek knowledge on my own and learn about my ancestry. I never really believed in the whole idea of having a career in mind then choosing a major. You should do what makes you happy and when you’re doing so, it’ll never feel like work.”

Jaquaan White is the president of QC’s Black Student Union and an African studies major. He gifted Muhammad a token of appreciation from his club, which also was a co- sponsor for the event, prior to thanking her for her visit.

“The event was an overwhelming success based on attendance and the way the audience received Ms. Muhammad,” White said. “It certainly was powerful to see many Muslim women students come out to see her, she truly is a trailblazer in the athletic forum.”

Muhammad currently trains at the Peter Westbrook Foundation in NYC and is also a sports ambassador for youth all over the world teaching students about the importance of education and sports.

“We all have a rich heritage or culture and we should all be proud of who we are, where we came from, and where we are going,” Krinitz said, sum- marizing how important acknowledgements such as Black History Month and religious practices are. “The beauty of all religions is that it’s about interpretation and no one should judge and the “practicer” should never have to apologize for it.”

Yarah is a junior majoring in Media Studies with minors journalism, psychology, and business. In her free time, she reads, sings, and tweets as much about feminism as she can. She's also passionate about different cultures and faiths of the world and loves the bits and pieces of languages she's exposed to. She works for the Three Faiths Forum giving speeches to high school students about how accepting they should be towards people with different beliefs than theirs. Email her at yarah[at]theknightnews.com.

A Podium and A Legacy: Professor Lisa Bernard