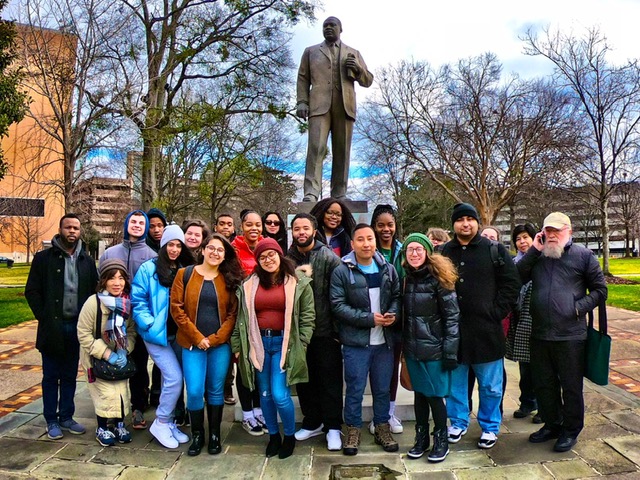 “Seeing Dr.King and what he went through makes me feel a little more confident about the outcome of society. Even though we have our lows, there’s a light at the end of the tunnel, and I think that’s what Dr. King stood for more than anything,” remarked Margarita Zias, a junior and computer science major. Zias, along with a group of 20 other Queens College students, recently went on a trip to Atlanta, Georgia, to learn about pivotal and key moments that impacted U.S. history. This was a CUNY program that “[sought] to provide students with the knowledge and skills needed to combat bigotry and intolerance in today’s society.” The program aforementioned is known as “In the Footsteps of Dr.King.”

Zias went on to explain the origin of the program’s trip. “QC has a very wide history with supporting the civil rights movement. Three QC students who went to Mississippi and tried to help the African American population with voting and voting rights…and because of our heavy involvement there, we are able to have this opportunity where we can send 13-20 students to go to this event and retrace the footsteps,” Zias detailed. The trip was led by Rabbi Moshe Shur, a “Rabbi [who had] spent a night in jail because he was arrested [because] he kept the booths open so people could vote later in the day. People tried to close polls the minute the voting day ended. He kept them open to let them vote,” remarked Zias.

The trip was truly an emotional experience. The group went to the Edmund Pettus bridge located in Selma, Alabama. They also went to the Lynching Museum in Montgomery, Alabama. Senior and accounting major, John Omatsola, gained a lot from going to  the museum. “The museum really sheds light on the severe injustice that African American people experienced… For the people in town to get the museum, they actually had to trick the mayor, and now, it’s a profitable business.” He added, “This trip made me appreciate being black. The history there was powerful. I was born in Nigeria, and didn’t understand racism until I got to America. The impact the history had is that black people always prevailed, no matter the circumstance.”

Wilson Delmas, a freshman who attended the trip, went into detail about the group’s  experience meeting Barbara Williams, the daughter of civil rights activist Hosea Williams. Delmas recounted, “One thing I remember she [Williams] said was when it comes to today, the way they celebrate Black History Month in her area is they give to the poor, they would give food. What they do now is host galas. The big gala is hosted for recognition of people and how much money they’ve given. She said it’s condescending. The whole meaning of Black History Month is just kind of forgotten and how when it comes to what these people did so we could have our opportunities, it’s all turned to turmoil.” Delmas makes a crucial point; society tends to bring awareness to these crucial events via galas and other high profile events, yet one does not see actual change occurring behind the scenes.

This leads one to wonder, how can one affect change if these methods are failing to bring about resolutions to the problems? In response, junior and economics major Ayodeji Salako stated, “Voting is one of the most important things one can do. If you don’t like the policies in place, if you feel that the government is not acting the way you like, vote.” Salako’s reference to the importance of voting for change tied in nicely with a message taken from the program. As Delmas added, “They [Hosea Williams and others] would go with upper adolescents, risking their lives, for a cause they truly believed in, even though it was something they couldn’t tangibly hold onto, but they had faith, a lot of faith, in what they wanted to change.”