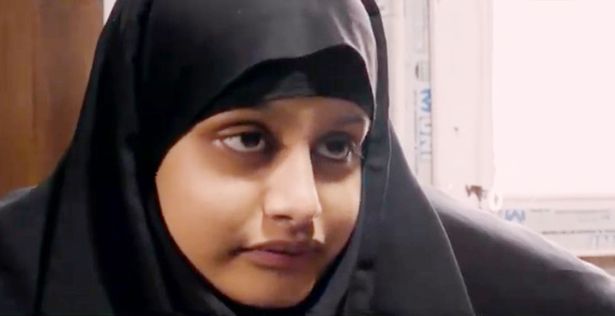 FShamima Begum is one of three private-school students from Great Britain that, when she was 15 years old, fled her home to Syria, in hopes of being recruited into ISIS. Four years later, she wants to return home. The catch? Her reason is not a change-of-heart about her radical political alliance, but rather, she fears the safety of her child, who was just born in Syria.

The New York Times reported that Begum begged for clemency in a, “televised interview,” while also wiping her hands clean of any involvement in Islamic propaganda and the recruitment process, citing that she solely took care of her family, which consists of her husband and children.

“I think a lot of people should have, like, sympathy toward me for everything I’ve been through,” she said. “I didn’t know what I was getting into when I left. And I just was hoping that maybe for the sake of me and my child, they let me come back. Because I can’t live in this camp forever. It’s not really possible.”

Despite her desperate pleas to return home, the now 19-year-old doesn’t regret her decision. The Times detailed that it was the “propaganda videos” that had originally won her over. Experts classified that what they were attracted to was “jihadist girl-power subculture.”

Back in 2015, Begum and two of her classmates had fled their East London community and boarded a bus to Syria after flying to Turkey. Due to the trio’s lack of direct involvement in the terrorist organization, Britain has decided to let Shamima and the two girls from her former school Bethnal Green Academy in Great London, Kadiza Sultana and Amira Abase, to return home free of all criminal charges. As of right now it is unclear how Shamima will find her way home.

Although the fate of Shamima hangs in the balance, the girl’s parents have secured her child’s. This is the 19-year-old’s third child, The Times of London published. The first two children, an 8-month-old boy and a nearly two-year-old daughter, had both died during her stay in Syria. The causes of death have been determined as illness and/or malnutrition.

The New York Times uncovered that Begum’s husband was a Dutch, “Islamic State fighter whom she married soon after arriving in Raqqa, Syria.” It also reports that he, “surrendered to Syrian fighters allied to the Kurdish-led forces,” after they had invaded the last Islamic-State controlled land strip, the village Baghuz, Syria.

The Guardian published a similar story to that of Shamima Begum, albeit with a slight twist. In an interview, 24-year-old American, Hoda Muthana, confessed her deep ‘regrets’ of joining the radical operation, when she was 19 years old, and that she wishes to return to Alabama with her 18-month-old son.

Muthana was at one point a, “prominent online agitator,” for ISIS. One of her more notable actions was announcing on social media her desire for “the blood of Americans to be spilled.” Upon receiving resistance from the United States government regarding her potential to return to the States, Muthana has filed a lawsuit against President Trump, Secretary of State Mike Pompeo and Attorney General William Barr, reports Buzzfeed News.

The lawsuit is designed to demand acknowledgement that Muthana is a citizen of the U.S. and that she should be able to come home. Buzzfeed adds that she will surrender to federal criminal prosecution if deemed necessary. As Hoda is not currently in the States, it was her father, naturalized citizen Ahmed Ali Muthana, who filed the lawsuit.

The law center that is representing Muthana says it took on the case because, “In spite of Muthana’s actions, the center… wants to protect Americans’ rights to citizenship… Citizenship is a core right under the Constitution, and once recognized should not be able to be unilaterally revoked by tweet — no matter how egregious the intervening conduct may be.”